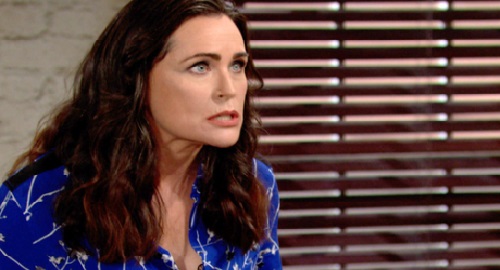 At Carter’s loft, Quinn insisted that Eric knew about her being with Carter Walton (Lawrence Saint-Victor). Brooke thought that was the most ridiculous thing she’d ever heard, but Quinn reiterated it was true and what Eric wanted.

Quinn went on to explain that Eric couldn’t physically make love to her due to his erectile dysfunction. Brooke was livid and wondered what kind of game Quinn was playing. Ridge Forrester (Thorsten Kaye) argued that Eric would’ve told him if that were the case.

Quinn countered that it was a sensitive matter, which Eric wanted kept private. Carter confirmed he knew about Eric’s ED eventually, so Brooke ranted about Quinn turning to her lover instead of having compassion for her husband. Quinn and Carter assured Brooke as well as Ridge that they fought Eric on this, but he really pushed for it.

Brooke acted like Quinn was using a personal issue as a fake excuse to continue their tawdry little affair. Ridge also remained in disbelief, so Quinn grew increasingly frustrated. She knew Eric would confirm the truth, but she was upset over betraying him by blabbing.

Quinn blamed Ridge and Brooke for that, but they still didn’t buy her side of the story. Brooke even went as far as to call this sick and twisted. She never thought Eric would agree to sit home alone while Quinn was off sleeping with her lover. Brooke said it was wrong on every level, so Quinn stormed out of the loft.

At the Forrester mansion, Eric confessed to Katie Logan (Heather Tom) that he couldn’t perform in the bedroom due to his ED. He explained how he pushed Quinn away and was in denial at first. Katie didn’t think that was a good enough excuse for Quinn’s affair.

“Not the first time,” Eric said. He shocked Katie by explaining the arrangement he’d made with Quinn and Carter. Eric didn’t want to hear any outrage, but Katie was just heartbroken for him and knew he had to be devastated.

“This isn’t love…giving your wife to another man,” Katie insisted. Eric argued that he manipulated the whole thing and hinted for Katie to go so he could rest. After Katie hugged Eric and thanked him for trusting her, she headed out – leaving Eric distraught as he stood there alone.

Once Katie was at the office, Brooke stomped in and threw her purse down on the table. She filled Katie in on how Justin Barber (Aaron D. Spears) caught Quinn at Carter’s place – picking right up where they left off. Brooke was appalled since Quinn claimed Eric pushed for it, but Katie admitted that Quinn was telling the truth for the first time in her life.

As for Quinn, she was frantic when she found Eric at the mansion. Quinn thought Eric should know right away and kept stammering about how sorry she was. She knew this would upset Eric, but she relayed the news of Justin catching her in bed with Carter.

Eric was stunned, but Quinn suggested it got worse since Brooke and Ridge came over later with their moral indignation. Quinn once again said she was so sorry since she had no choice but to tell Ridge and Brooke the truth.

Eric rubbed his face in frustration before moving forward to comfort Quinn, but Ridge arrived to insist she cheated again. He urged Eric to toss Quinn out and felt she was pathetic – especially since she claimed Eric sanctioned the steaminess by sending her to Carter himself. Eric confirmed that Quinn was telling the truth – that he told her to be with Carter.