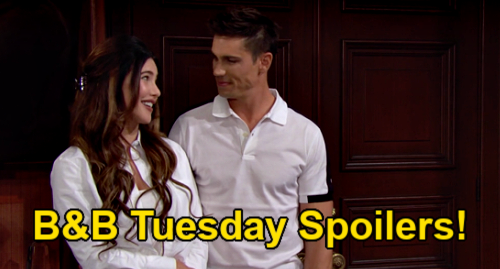 The Bold and the Beautiful spoilers for Tuesday, August 3 reveal that Steffy Forrester (Jacqueline MacInnes Wood) makes two wedding requests. One is asking Hope Logan Spencer (Annika Noelle) to play a special role in the ceremony. The second request has to do with honoring her namesake, Stephanie Forrester (Susan Flannery).

B&B spoilers for Tuesday reveal that Steffy has a long and complicated history with Hope. There have been times when they were at each other’s throats, which all stemmed from their relationships with Liam Spencer (Scott Clifton).

However, the two women would join forces when it was in everyone’s best interest. Steffy going to rehab and Liam’s arrest for murder are two examples of that.

Steffy admitted to Paris Buckingham (Diamond White) that she hasn’t had a lot of time to make new friends or even nurture existing ones. So, perhaps this is what prompts her to end the rivalry with Hope and make a special request.

On Tuesday, Steffy will ask Hope to participate in her wedding. Hope isn’t going to be just a guest at the intimate ceremony.

Instead, Steffy wants her to play a pivotal role in the nuptials. This must be regarding Steffy’s matron of honor. As far as we know, the position hasn’t been filled yet.

The Bold and the Beautiful spoilers for Tuesday reveal that Steffy will make a request of Eric Forrester (John McCook). She wants to honor her grandmother during the wedding. For one, she would like Stefanie’s portrait to be hung up. It’s not like Quinn Forrester’s (Rena Sofer) portrait is there anymore.

The Bold and the Beautiful Spoilers: Eric Forrester Obliges

There is no reason for Eric to deny Steffy’s request. He is touched that Steffy is putting so much emphasis on her family. First, she names the baby after her mom, Taylor Hayes (Hunter Tylo). Now Steffy wants to honor her grandmother, which he will be more than glad to agree to.

Plus, he really wants to make this day special for Steffy. There might be other ways that Stephanie is being honored at the “SINN” wedding.

Don’t expect the wedding to be without drama, though. There are surprises and bombshells coming up, so keep watching to find out what happens next.