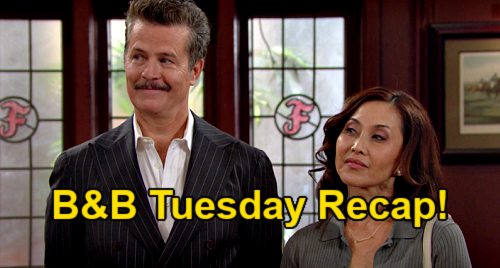 The Bold and the Beautiful spoilers reveal that on Tuesday, August 13, Eric Forrester (John McCook) agrees to Steffy Forrester’s (Jacqueline MacInnes Wood) request. Hope Logan Spencer (Annika Noelle) is asked to be a matron of honor. John “Finn” Finnegan (Tanner Novlan) talks to his parents about Liam Spencer (Scott Clifton) and his intention of giving Steffy a drama-free life.

B&B spoilers reveal that on Tuesday’s episode, Hope is excited about Steffy and Finn’s wedding. Liam mentions that “SINN” is wasting no time and Hope replies that she’s happy for them.

Liam says that he is happy for the couple as well. She asks Liam if he’s going to get jealous of his daughter having a stepdad like he did when Finn first started dating Steffy. Liam promises that won’t happen again.

On Tuesday, Eric tells his granddaughter that he saw Phyllis Summers (Michelle Stafford, The Young and the Restless). Then, Eric offers his home as the wedding location. Steffy agrees before asking Eric for a special request for her wedding.

Steffy would like him to hang Stephanie Forrester’s (Susan Flanery) portrait on the wall. He agrees to Steffy’s request and promises to tell the Finnegan family all about the Forrester matriarch one day.

The Bold and the Beautiful spoilers reveal that Steffy stopped by to speak with Liam and Hope about something important. She would like the couple to attend the wedding and of course, they agree.

Then, Steffy asks Hope to be her matron of honor. She explains that they have been through their conflicts in the past. However, they are strong, accomplished women and they can do better in the future.

The Bold and the Beautiful Spoilers: Finnegans Discuss Steffy and Liam

Finn adds that she was never able to feel secure with Liam but he saved her from that. Finn does credit Liam with being a good father, but he would never bring complications into Steffy’s life.

Jack Finnegan (Ted King) looks uncomfortable as Finn talks about his goal –  to make sure Steffy and the children have a calm and drama-free life.

Unfortunately, “SINN” will have to face a huge complication with lots of drama and it just happens to hit the couple on their wedding day.