The Bold and the Beautiful Spoilers: Tuesday, February 23 – Steffy Announces She’s Done With Liam For Good 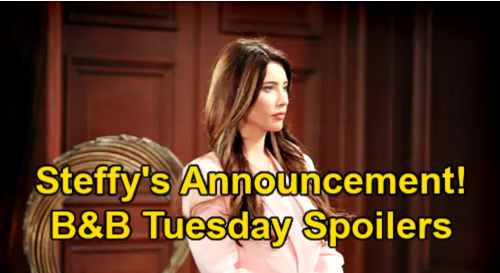 The Bold and the Beautiful spoilers for Tuesday, February 23, tease that Steffy Forrester (Jacqueline MacInnes Wood) will do her best to make her true feelings known. As B&B viewers know, John “Finn” Finnegan (Tanner Novlan) has been reassuring Steffy a lot lately about how he’s going to stick by her side even though the paternity test results didn’t come out the way they wanted.

Well, on Tuesday’s episode, Steffy will decide that it’s time to do something to reassure the two people who needs to hear it the most – Finn and Hope Spencer (Annika Noelle).

According to B&B spoilers, Steffy, Finn, and Hope will be together when Steffy gives a powerful declaration about her feelings for Liam Spencer (Scott Clifton).

Steffy will probably let Finn and Hope know that she has no desire, or even an inkling of a desire, to ever have a life with Liam ever again.

It looks like Steffy will make it clear to Finn and Hope that while Liam is an important part of her life as the father of her children, he’s not ever going to be her life partner ever again. We’ll see how Hope in particular responds to Steffy’s speech.

Meanwhile, on the new episode of B&B on Tuesday, February 23, Liam will spend some time with his dad, Bill Spencer (Don Diamont). Bill should be fresh back from his trip to Genoa City, Wisconsin, and he’ll probably want to reconnect with Liam and see how he’s doing with the fallout from the paternity test results.

According to B&B spoilers, Bill and Liam will lean on each other as they each lament about their respective relationship woes.

Of course, Liam will probably rehash his whole ordeal with Thomas Forrester (Matthew Atkinson) and the mannequin for the umpteenth time, and Bill will likely update Liam on his fears about Katie Logan (Heather Tom) possibly never taking him back.

Hopefully, Bill and Liam can rely on each other for emotional support as they each wonder whether they’ll be in relationships a few months from now. Bill just needs Katie to say she’ll take him back, so he’ll probably have an easier time getting his relationship back than Liam will.

As B&B viewers know, Hope is pretty disillusioned about the marriage at this point.

Tuesday’s episode is going to sizzle, so be sure to tune in! Stick with the CBS soap, and we’ll keep you informed about all the latest Bold and the Beautiful spoilers, updates, and news. We’ve got you covered!