The Bold and the Beautiful Spoilers: Wednesday, March 3 Recap – Flo Gets Forrester Job Over Ridge’s Objections 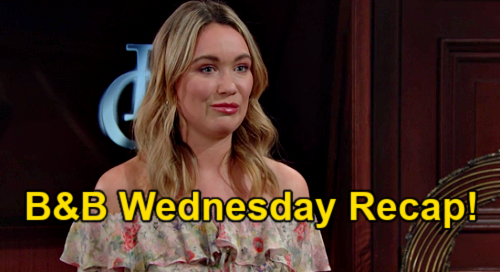 Brooke reiterated that Flo Fulton’s (Katrina Bowden) past transgressions were hard to forget, but that it was time to move forward. Katie said that she had an idea for Flo.

Meanwhile, over at Spencer Publications, Flo thanked Wyatt Spencer (Darin Brooks) again for going to bat for her with Katie. Shauna Fulton (Denise Richards) walked in as Flo was gushing about how she and the Logans had rounded a corner.

Flo then got a message from Katie to meet over at Forrester again, and she nervously left. Shauna wondered what the Logans wanted this time.

Back at Forrester, Carter Walton (Lawrence Saint-Victor) and Ridge Forrester (Thorsten Kaye) chatted in the design office. Ridge asked how things were going with Zoe Buckingham (Kiara Barnes), and Carter said that he wasn’t sure that he could give Zoe another chance.

Carter said he had ended things, but that he still cared about Zoe. Ridge thought that Carter deserved a woman who put him first.

In the backstage area, Zoe and Paris Buckingham (Diamond White) were talking when Zende Forrester Dominguez (Delon de Metz) walked in. Zoe lamented about her situation with Carter, and Paris urged Zoe not to give up on Carter just yet.

After Zoe took off, Zende said he was impressed at how Paris supported Zoe and wished her well.

“Carter makes Zoe’s life better,” Paris explained. Zende said that he was glad that Paris had decided to come to Los Angeles and stay at Forrester Creations, and he gushed that he had something special in store for Paris.

Back in the CEO office, Ridge walked in and found Brooke, Donna, and Katie there. Katie announced that she had something to discuss about Flo, and she proceeded to say that she wanted to offer Flo a job at Forrester Creations.

Flo walked in, and Brooke told her that while forgiveness is difficult, acceptance is in order, and that they all want to welcome her here at Forrester. Flo asked whether they were offering her a job, and Ridge said that he hasn’t forgotten what happened, but that he stands with Brooke on this.

Katie said that Flo could work with her in PR, and Flo immediately accepted, saying that this is incredible and that she could feel her father’s love and support right now. “We can all feel it,” Katie said. “I promise I will make you all and my father very proud,” Flo said.

Back in the design office, Carter was working when Zoe walked in. Zoe said that it seemed that Carter was avoiding her, and she wished she had never hurt him. Zoe asked for a moment to talk about their future, but Carter said that he wasn’t sure that they had a future.

Zoe apologized, saying that she was begging for Carter’s forgiveness. “Please, give us another chance,” Zoe begged.

That was a terrific episode of B&B, and there’s much more coming tomorrow, so stay tuned! Don’t forget to check CDL regularly for the latest Bold and the Beautiful spoilers, daily episode recaps, and news.