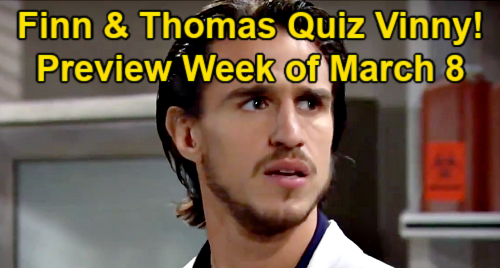 The Bold and the Beautiful (B&B) spoilers preview for the week of March 8-12 teases that Thomas Forrester (Matthew Atkinson) is going to do his best to get closer to the truth about Steffy Forrester’s (Jacqueline MacInnes Wood) paternity test.

As B&B viewers know, Thomas strongly suspects that Vinny Walker (Joe LoCicero) had a hand in switching the DNA test results that “proved” that Liam Spencer (Scott Clifton) was the baby’s father.

Well, it seems like Thomas has been badgering Vinny endlessly about the real truth. Vinny has adamantly denied switching the paternity results to make it look like Liam’s the father instead of John “Finn” Finnegan (Tanner Novlan), but Thomas knows his friend too well.

Thomas can see the clear nonverbal signs that Vinny is probably lying, and frankly viewers can see it as well.

The new B&B preview for the week of March 8 is out, and it addresses Thomas’ frustration with Vinny, but the preview makes it clear that Finn will also get involved in the situation in a very big way.

The preview shows Thomas asking Vinny at the lab if he did or did not change Steffy’s paternity test results. Just then, Finn walks into the lab. “I’d like an answer to that, too,” Finn demands.

Thomas then points out to Vinny that the truth is going to come out sooner or later. “Could I be the father of Steffy’s baby?” Finn asks angrily. Vinny glares at Finn in defiance, clearly not wanting to answer.

Of course, viewers know that Vinny is a bit protective of Steffy, and he doesn’t seem to want Finn anywhere near her going forward.

We’ll see what Vinny ends up saying, and if he coughs up the truth at last. Since B&B spoilers for the week of March 8 clearly say that a joyous truth will be revealed to many parties, it certainly sounds like Vinny’s going to crack under the pressure and admit the truth – that Finn is the father of Steffy’s baby.

We should note, too, that there’s some drama shown in the preview between Steffy and Finn, with Steffy adamantly telling Finn that she’s carrying another man’s baby.

B&B spoilers indicate that Steffy is going to make plans to leave Los Angeles and Finn behind – most likely as a way to set Finn free from what she thinks is a terrible situation for him.

Perhaps Steffy will pack up and prepare to take Kelly Spencer (Colette and Avalon Gray) to go overseas to be with her mother Taylor Hayes (Hunter Tylo).

Whatever the case, it looks like Steffy’s going to end things with Finn for his own good – but this will of course be before she knows the truth about Finn being her baby’s father.

It should be an exciting time, as B&B spoilers say that Finn will race against time to prevent Steffy from leaving. Will he rush to Steffy to tell her the news about him being the father of her child? That would make for a great resolution to this story for sure!

It looks like we’re in for a great week, so stay tuned! We’ll of course give you updates as B&B news comes in. Stick with the CBS soap and don’t forget to check CDL as often as you can for the latest Bold and the Beautiful spoilers, daily episode recaps, and news.

Does Vinny have a secret? 🤫 Tune in to find out. #BoldandBeautiful is new this week on @CBS. Watch the latest full episode of The Bold and the Beautiful on @paramountplus! pic.twitter.com/vPmUuorfkh