The Bold and the Beautiful Spoilers: Week of November 29 Preview – Ridge Realizes Brooke Has Feelings For Deacon 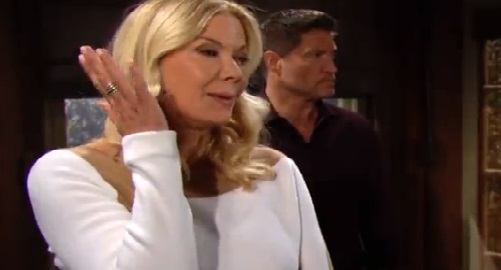 The Bold and the Beautiful spoilers reveal the preview for the week of November 29 will impact Ridge Forrester’s (Thorsten Kaye) marriage. Ridge confronts Brooke Logan Forrester (Katherine Kelly Lang) about her feelings for Deacon Sharpe (Sean Kanan). Brooke is forced to make a confession and it could mean the end of “Bridge.”

B&B spoilers reveal that after Deacon was released from prison, he went straight to Hope Logan Spencer’s (Annika Noelle) cabin. Deacon said that he wanted to reconnect with his daughter. However, he also paid a visit to Brooke and admitted that he’s never gotten over her.

Deacon made it clear that his fantasy is to be a family with Brooke and Hope. When Deacon confessed his feelings for Brooke, he hoped that she felt the same way.

At the time of Deacon’s confession, Brooke scoffed at the love declaration. However, during the week of November 29, Ridge will become concerned that his wife’s heart is torn. Ridge doesn’t understand why Brooke is defending Deacon.

Even though Deacon is Hope’s biological father and the two want a relationship, Ridge feels there is something more to Brooke’s support.

The Bold and the Beautiful spoilers reveal that the preview clip confirms that Ridge confronts his wife. Brooke is asked directly if she still has feelings for Deacon.

When Brooke is cornered about her heart, she doesn’t laugh, roll her eyes or scoff at Ridge’s question. In fact, Brooke looks like a woman who is divided between two men.

Steffy half-laughs and says that everyone knows that Deacon can’t be trusted. Despite the con man’s past, it seems that Brooke never really got over him.

Ridge isn’t just going to walk away and hand Brooke over to Deacon, though. His face full of determination and fury, Ridge says, “this won’t end well.”

Just how far is Ridge willing to go to eliminate Deacon? What will Brooke decide to do about her divided heart? Which man will win Brooke in the end: Ridge or Deacon?

We have a feeling that Hope might have a lot to do with Brooke’s final decision. Stay tuned and keep watching the CBS soap to find out how this love triangle ends!