The Bold and the Beautiful Spoilers: Week of September 20 Preview – Ridge The Secret Buster – Quinn Investigated 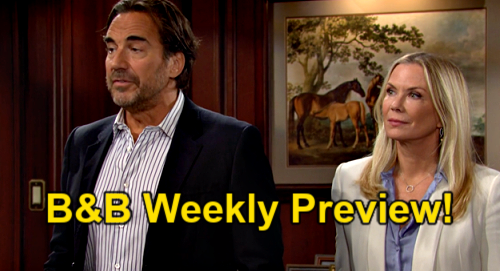 The Bold and the Beautiful spoilers reveal the preview for September 20 to 24 has been released. It shows that Quinn Forrester (Rena Sofer) and Carter Walton (Lawrence Saint-Victor) agree to keep one more secret. However, they aren’t the only ones hiding something. Ridge Forrester (Thorsten Kaye) sends Justin Barber (Aaron D. Spears) undercover.

B&B spoilers reveal that Eric Forrester (John McCook) has his marriage back. However, Eric is making a really big deal out of his problem in the bedroom.

Despite Quinn assuring him that they will overcome it, Eric has decided to take drastic action.

The Forrester patriarch keeps pushing Quinn and Carter to engage in passion. At first, “Quarter” resisted but that will all change on Monday, September 20.

The preview reveals that Carter and Quinn give into temptation. Although they have “permission” to be together intimately, Quinn says that it still doesn’t feel right.

As the star-crossed lovers struggle to figure out what to do, they come with a short-term solution. However, it will most likely be the beginning of the end for “Queric.”

The Bold and the Beautiful spoilers reveal that Quinn tells Carter that nobody can know what they did.

So, it sounds like Quinn wants to play the dutiful and loyal wife despite being told she can engage in passion with Carter.

This will be just one more lie that Quinn keeps from her husband after she promised never to deceive him again.

The Bold and the Beautiful Spoilers: Justin Going Undercover

What Quinn doesn’t know can hurt her and Ridge is determined to find out the truth. In the preview clip, Ridge says that he is tired of Quinn making a fool of Eric.

Then, Ridge instructs Justin to look into every single corner of Quinn’s life. With Carter and Quinn keeping a new secret, along with Eric’s “arrangement,” this storyline is about to blow up a lot of lives.

How will Eric explain why he was willing to let his wife sleep with another man?

How will Quinn and Carter justify going along with it, as well as keeping another secret? We will have to keep watching the CBS soap to find out!

Be sure to catch up on everything happening with B&B right now. Come back often to CDL for The Bold and the Beautiful spoilers, news and updates.

Ridge is ready to find the truth. 👏 Don’t miss all-new episodes of #BoldandBeautiful this week on @CBS! Watch the latest episodes on @paramountplus. pic.twitter.com/pjXduUv0yY