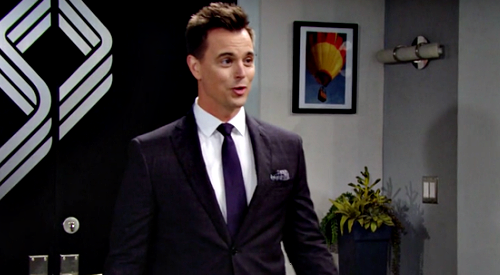 The Bold and the Beautiful (B&B) spoilers tease that Wyatt Spencer (Darin Brooks) may discover a captive Thomas Forrester (Matthew Atkinson) and become hostage number two. Wyatt could be caught in Justin Barber’s (Aaron D. Spears) deranged scheme since he’s about to become suspicious of Justin and his plans.

Justin will keep Thomas quiet and make himself the new king of the company, but Wyatt will think the focus has to remain on freeing Liam Spencer (Scott Clifton) and Bill Spencer (Don Diamont).

Wyatt’s bound to think it’s weird that Justin seems to have given up on clearing Bill and Liam. He could easily sense that Justin likes being in power and isn’t keen on handing it back to the Spencer men.

If Wyatt starts to feel like Justin isn’t putting in true effort as Liam and Bill’s attorney, he might do some digging.

That’s especially true if a clue surfaces that points Wyatt in the right direction. There might be some hint that sets up a trail for Wyatt to follow. It could lead to Wyatt discovering Thomas locked up in a cage and realizing Justin has totally lost it!

Wyatt might resolve to call the cops and grant Thomas his freedom, but how far will Justin go to keep the truth under wraps?

At that point, Justin may let the scheme spiral out of control even further. He might become so consumed by his desire for power that he kidnaps Wyatt next.

There’s also the matter of Thomas’ abduction and the charges Justin might face. That’d give Justin another great reason to add to his list of crimes and silence Wyatt before he blabbed to the authorities.

Wyatt’s definitely going to get suspicious, so he could do some snooping and become the next B&B character to land in a tight spot.

We’ll pass along updates as other news rolls in. The Bold and the Beautiful spoilers say even more surprises are on the way as the aftermath of Vinny’s death gets messy!

CDL will have other fantastic Bold and the Beautiful spoilers, news and updates to read up on, so stop by again soon for the latest B&B details.