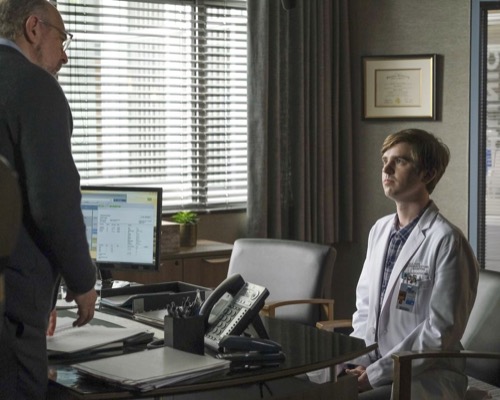 Tonight on NBC their new medical drama “The Good Doctor” airs with an all-new Monday, March 22, 2021, episode and we have you The Good Doctor recap below. On tonight’s The Good Doctor season 4 episode, 12 called, “Teeny Blue Eyes,” as per the ABC synopsis, “When a renowned surgeon comes to St. Bonaventure for treatment, the team’s enthusiasm is quickly overshadowed by the doctor’s behavior.

After studying his case, Dr. Shaun Murphy sees a pattern he recognizes. Meanwhile, Shaun and Lea are forced to make a life-changing decision that will alter the course of their relationship.”

In tonight’s episode of The Good Doctor, Shaun is in bed, he wakes up and notices that he is alone. He gets up and Lea is in the living room, she can’t sleep. He tells her that she should take her blood pressure every day. He tells her that he loves her and wants this child. She asks if is the right time in their career and life for a child. She says they need to think about what to do.

Dr. Chambers, a renowned surgeon is in St. Bonaventure for treatment, he has been having tremors in his hands. Claire says it looks like a carpal tunnel. He says one he prefers blankets that is not sandpaper, two dim the lights. Shaun says that if he made a list, he doesn’t need to tell them.

Asher, Alex, and Morgan are with a patient, his name is Oscar and he has been in pain for nine months now, sometimes his forehead, his cheeks, and his nose. He has been to six doctors, he can hardly smile or kiss his wife. He begs them to help him.

Shaun goes in to see Aaron and tells him that Lea is pregnant. He asks him if he has any concerns, Shaun says sleep deprivation. Aaron says this is a gigantic moment for anyone, but especially for him with his ASD, his family, and his job.

Asher says maybe Oscar’s problem is psychological, Alex says to do an MRI.

Regarding Dr. Chambers, Shaun says he didn’t think he was a jerk and he knows what he has. Shaun tells Dr. Chambers that his condition is probably caused by his repetitive technique, he doesn’t do sutures in varied ways, this kind of obsessive behavior is common in people with autism.

Dr. Chambers says he is not autistic and looks offended. Shaun tells him that from his observation, he clearly has sensory problems. Marcus tries to calm Dr. Chambers down. Afterward, Marcus asks Shaun what was he thinking, don’t talk to the doctor about autism again.

Alex speaks to Oscar’s wife about her husband’s pain. A few years ago he was on a job site, he accidentally shot himself in the palm with a nail gun. They have him opioids and it took him a year to kick. And now, he is taking more pills than ever. Every time she discusses it, he gets mad. She moved out last week and she thinks he is faking.

Alex tells Morgan that he is discharging Oscar, they have other patients that need their help.

Lea goes to see Claire and asks if Shaun’s ASD can go on to the baby, it is possible. Lea looks panicked, she says she is just enjoying just being. Claire tells her that she has to choose.

Alex goes into the MRI room, Morgan shows him the film, Oscar’s pain is real. Morgan and Alex tell him it is a disorder of the nerve that carries the sensation from the face to the brain and is very hard to diagnose. Oscar’s wife feels bad, she admits to him that she thought he was lying and just being an addict. Oscar forgives her, he says no matter, she is there with him and by his side. He needs surgery, Oscar says yes and thank you.

The team goes to speak to Dr. Chambers and tell him that they want vertebral artery BTO. If he tolerates it, they would sacrifice the vessel with onyx embolization.

Alex tells Morgan that he is attracted to her and she says, “are you kidding me?” She tells him that she can’t have a roommate that is hitting on her, he says he was only joking.

Dr. Chambers calls Shuan a child playing dress-up. Shaun still thinks he has autism. Dr.Chambers finally gives in, he tells Shaun that he will take an autism test and fails. Shaun knocks into a mug in his room and Dr. Chambers gets upset and calls him a stupid idiot.

Oscar is not doing well after surgery, his pain is worse. If they do more surgery, there is a risk of paralysis. Oscar still wants the surgery, he doesn’t want to live with the pain.

Shaun is upset, he is outside and tells Claire. Dr. Chambers doesn’t like him and there is Lea, he says it is hard because he is dealing with two things at once. He asks her what if his child is picked on, what if he is different, how can he be a good father.

Oscar is in surgery, there are complications, a clot. Alex tells Morgan they did well together, she says they did, but he still has to move out tonight.

Shaun goes to see Dr. Chambers and tells him that he used to think that all he needed to do was be a doctor and he would be happy. But he realized, he wanted more, he changed. He tells Dr. Chambers that he can change too. Then, Shaun tells him about his brother, he gave him a plastic scalpel before he died. He gives Dr. Chambers his mug, he fixed it. Dr. Chambers says he was nine years old when his father died, he always brought him a mug with hot chocolate. He always tried to fit in, but it didn’t work, he gave up on relationships, everything, except the one thing he is good at. People tolerate him because he saves lives, without that, why would anyone care about him. Shaun says he cares. Time for surgery, Shaun takes the mug out of Dr. Chambers’ hand.

Shaun is home, Lea is making dinner. She asks him if he has thought anymore. He says he made a list, Lea did too. He says he thinks he would be a good father, but he can’t know for sure. She thinks he would make a good dad. He tells her that she was right, it is complicated, but he wants her to be happy. She says there are so many reasons to do this, and so many doubts, she is scared. She says if they are both having doubts, maybe now is not the right time. He says ok. Shaun holds her hand.

The next morning, Shaun takes out the scalpel his brother gave him and holds it.

Dr. Chambers is getting ready to leave the hospital, he thanks, Shaun and Enrique.

Oscar has just woken up from surgery, he tries to touch his face and he is fine.

Enrique tells Claire that he is transferring out, last year he applied for a program at John Hopkins with doctors who travel the world and help out in needy areas. She tells him it sounds like a good place for him. He tells her not to forgot to do something for herself now and then.

Alex has packed his bags and he is moving out. Morgan asks him if he was messing with her or not. He says he wasn’t messing with her. She says it is good they are not roommates anymore. She leans in and kisses him.

Shaun and Lea are in a clinic, they both look terrified. She says she spent all day telling herself why this is a good idea, but now that it is actually happening, it doesn’t make her feel any better, just really sad. Maybe it is not the right time, but will it ever be. Shaun says he feels the same. She asks him if they are really doing this, he tells her they are having a baby.