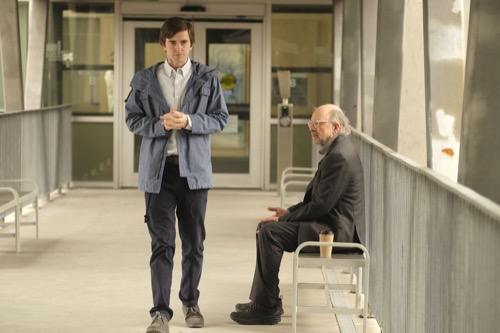 Tonight on NBC their new medical drama “The Good Doctor” airs with an all-new Monday, May 17, 2021, episode and we have you The Good Doctor recap below. On tonight’s The Good Doctor season 4 episode, 17 called, “Letting Go,” as per the ABC synopsis, “Dr. Claire Brown and the team must face hard truths about what lines they are willing to cross when one of Claire’s idols becomes her patient.”

In tonight’s The Good Doctor episode it begins with Lea and Shaun, he gives her the stats about miscarriages, it is quite normal. She agrees and says she just needs a few more days’ rests. She says she is alright, they just need some time. When he leaves, Lea doesn’t look alright.

In the hospital, Alex asks Shaun how is doing, he says ok, Lea thinks they need time. Audrey is there, she tells him that he could have taken more time but she respects his decision.

Senator Clark is welcomed by Morgan and Claire to the hospital. Claire tells her that she is a huge supporter. She says she was in her hotel this morning when she began to get twitching and blinking on the left side of her face, this is the third time. Morgan says it is a facial spasm and they should do an MRI to rule out any serious possible causes.

Arty Hill is in an emergency, he tells Alex that he has mild heart failure, he is tired, and has had heart palpitations. Alex asks how he knows he has mild heart failure, Arty says he just got off the phone with his doctor who did his bypass and he told him, and to go to the nearest recovery room. Alex asks when the bypass was and just then, Dr. Paul Nakano walks in, he says a month ago, he is the doctor who performed the surgery at San Jose General.

It turns out, Dr. Nakano was Marcus’ chief of surgery when he was a resident. Shaun is walking in the hall when Arty calls him into the room, he says he can’t find his socks and the button to call someone. He tells Shaun about his medical condition. He asks him why he keeps it so cold in there, his feet are freezing. Meanwhile, Lea is home and watching TV. She turns it off and her mom is calling, she ignores the call and goes to bed.

Dr. Nakano speaks to Alex and Marcus about what to do to help Arty when Shaun walks in. Shaun says Arty has cold feet, which means impaired circulation, which means constricted blood flow from the heart, which means a damaged vessel if they try to push a new valve through the damaged area, it will kill him. Shaun tells Dr. Nakano that he made a mistake during the bypass, most likely a tear to the aorta. Shaun says they should perform an angiogram on Arty to prove it.

Marcus looks like he is going to faint with what Shaun said to Dr. Nakano who stands by his surgery and says, he did not make a mistake. Shaun says studies show that old people are less likely to admit mistakes because they are less aware when they have made one. Marcus turns to Shaun and says now that he has given his opinion, he suggests he take those few days of leave that he has. Shaun says she prefers working, Marcus tells him to do it somewhere else. Before Shaun leaves, he says, “you will kill him.”

Shaun goes to speak to Arty and tells him that he thinks his surgeon is wrong. Later, Marcus tells Shaun to go home, this is why you take a leave of absence when you need one. Marcus tells him that he is angry. Dr. Nakano says they will do the test, he has forced their hand, Shaun says good and walks out of the room. Dr. Nakano tells Shaun that he would have fired him.

Senator Clark finds out that there is no surgery to fix her problem, just Botox. She is worried, she wants a solution because if this is caught on camera, she thinks it will affect her career.

Lea is playing games on her cell phone when the battery is about to die, she looks for a charger and can’t find one so she grabs her keys and heads out of the apartment.

Alex finds Shaun still in the office, he tells him that Marcus is really mad. Shaun says they will find out that he is right. Alex says they did the angiogram, he was wrong. They are giving Arty time to rest before the other procedure and he thinks he should leave the building while he is still forgivable.

Lea finds herself at the hospital, she finds it hard to pass people who keep looking at her with sympathy.

Jordan, Morgan, and Claire sit down to see if they can find a way to help Clark.

Marcus tells Dr. Nakano that he wouldn’t have fired him, he is going through some personal issues.

Lea is charging her phone in her office when Jordan comes in and tells her that when he grandma died she remembers all the women of the church coming by, the pastor had a special prayer at the gravesite. They said goodbye to the past, she tells her that she is saying goodbye to the future, she is sorry for her loss.

Claire and Morgan tell Clark about the surgery, she says she is appointing Cal Lewis as her health care surrogate when she is under.

Shaun is walking outside when Aaron walks up and tells him that he got his text. He says he accounted for every symptom. Aaron tells him to go home, he suffered a loss, he needs to deal with it and face it. Shaun tells him again, go home and be with Lea.

Shaun is home with Lea, she gets up to make tea, and her phone rings, Shaun picks it up. Her mother is asking Shaun about strollers, Lea didn’t tell her that they lost the baby. When she keeps talking, Shaun loses it on the phone and tells her to shut up, he hangs up on her.

Shaun tells Lea that he doesn’t know how to face their loss. She says Claire told her about this support group that can help them.

Arty is in surgery when Shaun comes running in and tells them to stop. Shaun says Dr. Nakano did everything right in the surgery, Arty has a congenital narrowing of the abdominal aorta. Dr. Nakano invites Shaun to join them when they operate on Arty, Marcus looks at Dr. Nakano with a smile.

Clarke is getting an MRI, she stopped breathing. Claire tells Cal Lewis there is a one in four chance that if they do surgery on her that she could die, she has a brain aneurism. They want to notify her husband, he says no, he was left in charge.

Dr. Nakano tells Marcus that he is quitting surgery, he decided fifteen minutes ago, he made a tiny error. He told himself that before he makes big errors, he would quit when he made the tiny ones.

Clark is awake, she made it through surgery. Claire walks her to the elevator and makes a comment about how she should tell her husband about her medical surgery, but she won’t, her career means more to her.

Shaun arrives home, Lea is finally crying and breaking down, Shaun hugs her.