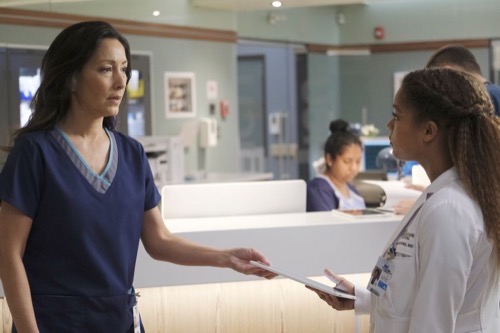 Tonight on NBC their new medical drama “The Good Doctor” airs with an all-new Monday, January 11, 2021, episode and we have your The Good Doctor recap below. On tonight’s The Good Doctor season 4 episode, 6 called, “Lim” as per the ABC synopsis, “As Chief of Surgery Dr. Audrey Lim struggles to cope with the residual emotional trauma of COVID-19, she encounters a young war veteran fighting debilitating PTSD.

After discussing his case with the team, Dr. Claire Browne suggests a radical treatment to help him. Meanwhile, still reeling from the recent loss of his mentee’s patient, Dr. Shaun Murphy declares he doesn’t want to teach the new residents anymore.”

Dr. Lim goes for a ride on her motorcycle and is quite reckless. She stops when she sees that a man has been hit by a car, she gets off her bike to help and says she is a doctor. The man is in surgery, there is a grade three liver laceration. Claire asks Audrey what she was doing on her bike at that hour, it is the other side of town. Audrey says she was taking the scenic route. Something tore through the intestinal, it is a metal piece but it is eroded, so looks like the accident disloged it.

Claire asks Audrey how Asher seems, she says fine. Clare says too fine for someone who has lost their first patient. Morgan walks up and tells Audrey that a 24-year old came to emergency complaining about abdominal pain, she is pregnant. Not a happy surprise, she wants an abortion. She has underlining medical issues and will need help from the surgical team. They walk up to Shaun and he is holding two singing stuffed frogs, Audrey turns them off and he says Lydia’s birthday is tomorrow and he doesn’t know which one to choose. Claire walks away.

Shaun says it is her birthday with him as boyfriend and girlfriend so it needs to be awesome. Audrey says, in that case, try something more personal and romantic. Then she tells him to find one of the newbees and teach them how to do a suction D&C, he says no, he will do it himself, he is a good surgeon and will do it himself. He says he is opting out of teaching because he is bad at it. She tells him to choose someone.

Outside the room, a patient, Ben, is having a flashback and looks out of control. A woman walks up and tells him that he is not in Afghanistan, he is in a hospital. Dr. Lim tells him that he was hit by a car, he had surgery, but he is going to be ok. Ben’s wife tells Claire and Dr. Lim that he suffers from PTSD, his mind is never at rest. He has terrible nightmares and flashbacks. He has had therapy, nothing has helped.

Dr. Lim sees Shaun in Rose’s room, she reminds him that she is not his patient. He says Rose was telling him about her gift. She asks him who he is leading through the DNC. He says the one he is leaning towards doesn’t want to. Dr. Lim and Shaun go see Dr. Jordan Allen, he tells her she needs to do it, it is her job. Dr. Allen says she is a Christian, performing an abortion goes against her beliefs. Dr. Lim says it is her job to make sure she can perform all surgeries, even abortions. Dr. Jackson volunteers, Dr. Lim allows it and says that is the type of ambition she likes to see.

Dr. Allen goes to see Dr. Lim and tells her that if she feels that she should learn how to do an abortion, then she wants to do it.

Ben woke up, he is having pain in his arm – it has been hurting for years, but he says this is something else. He says he was in a convoy, he dislocated his shoulder. The car accident could have aggravated a previous injury. Claire suggests a nerve block, Dr. Lim explains it doesn’t come without risk, but when Ben finds out it might help him with his PTSD he wants to proceed.

After Ben’s surgery, Dr. Lim is having coffee, she gets a message regarding him. He heard a noise in the hall and lashed out at his wife when he was back in his room, he hit her. She tells Ben she is going home, she just needs some time.

Dr. Lim tells Claire that Ben needs phsychological help. Marcus approaches Dr. Lim, he is not happy that Olivia was taken off the abortion. Then, we see Jordan and Dr. Lim with the patient, who tells Jordan that she is scared. Jordan asks her if she wants to go ahead with it, the patient says yes, Jordan tells her then she is doing the right procedure for her.

Asher is in the stairwell, Dr. Lim joins him and asks him what is wrong. He says he is upset that he couldn’t help Ben. Then he asks her if she ever lost a patient that she knew she could have saved. She says when COVID started they had to cancel all non-urgent surgeries. There was a young mom with a heart condition, more urgent than she thought and she died, waiting for her to put her on the schedule. She says you get past it because that is the job. You will always remember it, but you will stop reliving it. And if you don’t, you can’t be a surgeon and she is pretty sure he is a surgeon.

Back to the abortion, Jordan is performing the surgery while Dr. Lim watches. Jordan freezes, Dr. Lim takes over and tells the patient they are almost done. Afterwards, Dr. Lim lays into Jordan and tells her she had an opportunity to back out before the procedure but she agreed to do it. She took on an obligation and she failed, and if she does again, she will remove her from the program.

Dr. Lim goes to her office and finds Shaun with adult toys on her desk, and asks if she has a favorite. Claire walks in and is shocked. Claire tells Dr. Lim what she thinks they should do for Ben. Shaun tries to offer his thoughts, Dr. Lim tells him off and tells him that he made his case her problem and Leah’s presents her problem, and he needs to grow up and take responsibility for his own problems. Shaun leaves the room. Claire tells Audrey that she suffered PTSD last year and if she needs a friend, she is there for her. Audrey says she feels disconnected, but it comes with the job, she will get over it. Then, Claire gets a message, there is a problem with Ben.

Ben is on the roof, he says he is a threat to everyone and mostly to the ones he loves. He makes everyone around him suffer. Dr. Lim tells him about the surgery that might help.

Dr. Lim is scrubbing in, Shaun is there, he tells her that he wants to scrub in, she says ok. Shaun supervises Asher through the surgery, and Dr. Lim in turn supervises Shaun.

Dr. Lim goes to see Rose and tells her that she is ok, they are dischagring her. Rose tells her that it was her, she made her heart race, she is about to implode. Then, Dr. Lim gets a code blue.

Jordan goes to see Dr. Lim and tells her she was wrong about what happened with the case. She goes on to say she was scared for anyone to find out, she choose her career over motherhood and her faith.

Ben is awake from surgery, his language and memory seem to be intact. They will have to take some tests before they can know if the surgery was successful. He starts talking about what happened when he was in the convoy. He tells his wife, Dr. Lim and Claire and afterwards, he is ok.

Dr. Lim leaves the room, she looks like she is going to pass out. She is holding the wall, she sees Shaun and staff celebrate Leah’s birthday.

Rose is in her hospital bed, she sees Dr. Lim at the doorway who tells her that she has a heart condition, but it is very treatable. It explains all her symptoms and gets worse with stress. Rose tells her that she is there because she is hurting and has nowhere else to go. Rose says she doesn’t have a magic wand, she can only hold up a mirror and tell her to slow down. She tells her that she can’t outrun her pain, it is going to kill her.

Then we see Audrey, back on her motorcycle driving recklessly, and she loses control, spills out on to the street and off the motorcycle. She is able to get up, she is lucky that she is not more seriously injured. She walks towards her bike and hears voices, she is limping. She re-hears all the time of deaths that she has heard as a surgeon.