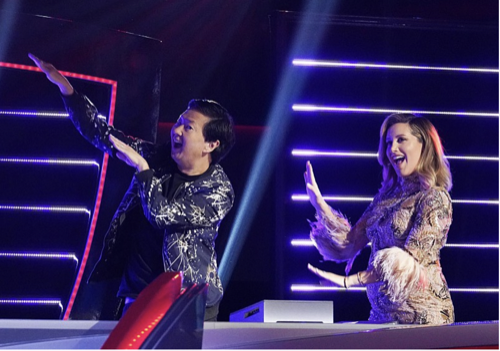 Tonight we are celebrating The Masked Dancer with a dance party. Our panel judges are Ken Jeong, Paula Abdul, Brian Austin Green, and Ashley Tisdale.

The final three are Cotton Candy, Sloth, and Tulip. Each contestant will reveal a brand new clue tonight.

Tulip’s motto is “the show must go on,” and we take look back at her journey. She says she didn’t have regular teenage life and this show has given her back what she had lost. Her first performance was Ken’s favorite. Ashley thought that she was very professional, the way she came back after her fall. Paul thinks she is very versed in dancing and athletic.

The Sloth says being on the show is the most exciting he has done in his life and he has fallen in love with the Sloth. He was ready for healthy competition and he feels like he has been kicking some major butt. Ken says the Sloth is so athletic and all-around good, the LeBron James of the masked dancer. Paula says one of her favorites is the Sloth because he kick-ass dancing, but he also is very comedic through and through.

Becoming the Tulip on the Masked Dancer has become a once-in-a-lifetime experience. In the past, she allowed other people to push her aside, but not here. During rehearsals, she was very nervous. Paula has been blown away by Tulip and she felt she was a trained dancer when she started tap dancing.

If the panel judges were on the Masked Dancer dancing, what would they want to be? Ashley: a mermaid, Ken: A golden doodle inspired by his family dog, Mocha, Brian: a rock, Paula: a fierce chihuahua or Ken Jeong.

It all comes down to the last three masked dancers, Tulip, Cotton Candy, and Sloth. Craig Robinson sings “the time of my life,” from Dirty Dancing, and the last three dancers perform. It is finale time and the last three are dancing for the diamond trophy that will be given out at the end of the show. So far, Brian and Paul are in the lead with two correct guesses each. Ken and Ashley have had one each.

Tulip, for her final performance she is going to show that she is the queen of this dancefloor. Tulip performs to “Kings & Queens” by Ava Max. Word Up: Followers.

Panel Comments: Ashley: “This was genuinely amazing, I am having the time of my life right now. This was epic, you are so my favorite right now. This has made you come to life. I still think it is Mackenzie Ziegler.” Ken: “You did a flip with a tulip head, it was so epic and I can’t think of a better way for you to finish this off than with your best performance ever, perfect. I think it is Lucy Hale.” Paula: “Your dancing is amazing.”

Sloth says he is no longer the bad boy, nobody can dislike you if they can’t see you. He takes pride in his strong muscles and he is ready to bowl over the competition. Sloth performs to “Ballroom Blitz” by The Struts. Word Up: Magical.

Panel Comments: Paula: “You have been professionally trained, you are brilliant.” Ken: “I tell you that was a perfect strike, what a way to close out an epic season for you. I believe the sloth is Channing Tatum.”

Cotton Candy says that her world was full of judgment, not good enough, be better. She has never felt more powerful as Cotton Candy, she is a champion. Cotton Candy performs to “This is me” by Kesha. Word Up: Foundation.

Panel Comments: Brian: “She is not playing around, she is here to win.” Ashley: “That was really emotional, you did such a great job.” Paula” “This was a great finale performance and I felt like it was a redemption for you that you didn’t need to prove to us.” Ken: “I keep thinking Michelle Kwan.”

Tulip, Sloth, and Cotton Candy are on stage together, time to vote for the favorite. The third-place winner is Tulip.

The Tulip is Mackenzie Ziegler.

The winner of the Masked Dancer Season 1 is The Cotton Candy.

The Sloth is Maks Chmerkovskiy.

The Cotton Candy is Gabby Douglas.

The panelist with the most guesses is Paula Abdul.