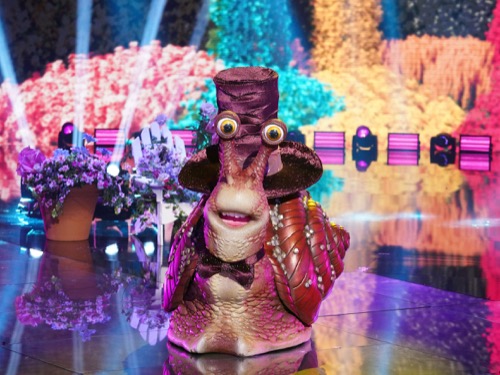 Tonight on FOX The Masked Singer airs with an all-new Wednesday, March 10, 2020, Season 5 Episode 1 premiere and we have your The Masked Singer recap below. On tonight’s The Masked Singer season, 5 episodes 1 called “Return of the Masks,” as per the FOX synopsis, “The three finalists perform one last time before all are unmasked and one singer takes home the Golden Mask Trophy.”

In tonight’s episode of The Masked Singer, it is a story of a world like no other where celebrities are transformed – this world is changing in ways that you will never see coming, surprises around every corner. No one is safe, they are introducing characters so talented and so secret, and there are the wildcards. Tonight a world bigger, crazier, and more star-studded than ever. The first game-changer is happening now.

It is host Nick Cannon to open up the show, it is guest host Niecy Nash, she is stepping in for Nick while he recovers from COVID-19. Our panelists are back; Ken Jeong, Jenny McCarthy, Nicole Scherzinger, and Robin Thicke.

Panel Comments: Nicole: “I have goosebumps all over, it was kind of creepy but so magical.” Robin: “I am completely blown away, the blend of the vocals, wonderful, great job.” Jenny: “I think this could be a singing cast, maybe from Highschool Musical or Glee. This is a game-changing costume.” Ken: “The performance was outstanding so they have to be professional recording artists. It literally can be anybody, you can’t go by appearance or body type.

The panel has to submit their first impression guesses, which will be revealed when the celebrity is unmasked.

The next performer is Snail who says he has graced the Oscar’s stage. He wants to show people that he can shine on his own. Snail is performing, “You Make My Dreams [Come True],” by Hall & Oates.

Panel Comments: Jenny: “I can’t recognize the voice, it is going to drive me crazy. I feel like he is pushing out Kermit the frog sounds. I think that maybe he is a little bit older. It could be Mark Wahlberg.” Nicole: “I know this guy hosted the Oscars, Jimmy Kimmel, or Adam Sandler.” Ken: “I actually think it could be Jay Leno.” Robin: “The costume is great, great song choice, it is one of my favorites. I think this person is throwing their voice a little bit, adding an extra twang or something. I don’t think we are getting the natural tone yet. I am getting a Jay Leno vibe from the voice, or Seth McFarland.

The Seashell is the next performer, she says when she was young she was pulled everywhere with her family. When her career took off, it was like a tsunami of success. She hasn’t sung in a really long time and wanted to face her fears. The Seashell is performing, “Listen To Your Heart,” by Roxette.

Panel Comments: Jenny: “Maybe it’s Jessica Simpson.” Nicole: “You seemed a little nervous at first but once you got started you were in a groove and you killed it. I saw the cowboy hat and thought this is someone maybe from Texas, maybe Dakota Johnson or Hillary Duff.” Ken: “I am going by the clues, I saw a witches broom, I think this is an actress that has also done some singing like Sarah Jessica Parker or Anne Hathaway or Kristin Chenoweth.” Robin: “I was thinking Jessica Simpson too, or Jennifer Love Hewitt.”

We are introduced to the first-ever “clue-meister” character, Cluedle-Doo! A costumed celebrity who will be unmasked at some point in the season. He gives the audience extra new clues that the panelists don’t see.

The raccoon is next, he is dressed as a cowboy and says sometimes to get the happy ending, you have to go through hell first. In his darkest days, he faced death, and to keep sane he recited his favorite story, “The Hunchback from Notre Dame.” He promised God if he had a second chance at life, he would only do good and he is still fulfilling that promise today. The raccoon is performing, “Wild Thing,” by The Troggs.

Panel Comments: Jenny: “I have no idea who it is.” Nicole: “I think he is a little older, like a legend, some legendary actor like Gary Busey, there is a lot of country western theme. It could also be Nick Nolte.” Ken: “I know exactly who this is, a fighter who has gone through a lot in life. I am going to go with Mike Tyson.” Robin: “I loved it because he didn’t follow a script, we were on the edge of our seats and that is entertainment at its finest. Great job. I am thinking Joe Pesci or Danny DeVito.”

Next, it is Robopine who says he was left to fend for himself with nothing but a dream. When he has his sights set on something, nobody can touch him. His kids and his grandkids told him to hang it up, I am sixty years old.” Robopine is performing, “Never Too Much,” by Luther Vandross.

Panel Comments: Nicole: “You are such a larger-than-life presence on that stage and then you got this silky voice, I am captivated by you. I think this is a triple threat, someone who can sing, dance, who can act, Donald Glover or Jamie Fox.” Ken: “The voice is silky smooth, I thought of Lionel Richie.” Jenny: “Whoever you are we are going to see you in the semi-finals.” Robin: “This singer is from Washington, I am going to go in a different direction, very talented and not sixty years old, Genuine.”

The votes are in, the performer forced to unmask right now is the Snail. But first, we retrieve the panel’s first impression guesses. Robin: Seth MacFarlane, Ken: Jay Leno, Jenny: Adam Carolla, but she is not going to stick with it, she changes to Senator Ted Cruz, Nicole: Adam Carolla, and she is changing to Billy Crystal.

The Snail is Kermit the Frog.