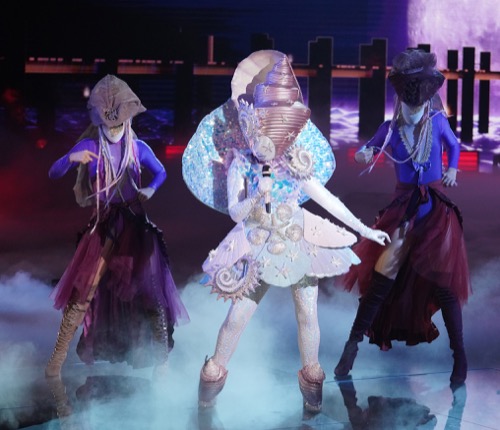 Tonight on FOX The Masked Singer airs with an all-new Wednesday, March 24, 2020, Season 5 Episode 3 and we have your The Masked Singer recap below. On tonight’s The Masked Singer season, 5 episodes 3 called “Enter the Wildcards!,” as per the FOX synopsis, “The first wildcard character enters the competition when the members of group A return to the stage for their second performances of the season.”

Tonight group A is back and the perfect storm is hitting as the first wild card hits the competition and we are going to need a bigger stage.

Niecy Nash is the guest host again this evening. The masked celebrities tonight from group A are The Raccoon, The Robopine, The Russian Dolls, and The Seashell, and the mysterious Wild Card.

The competition starts with The Russian Dolls. They totally confused the panelists with their harmonies, but they have not always been in unison. One of them was rushed to the hospital and there was no guarantee that he was going to be the same. The trauma makes them stronger and they don’t take anything for granted. Last week there was a large one and a small one, this week there are two small ones. This week The Russian Dolls are singing, “Wonder,” by Shawn Mendes. During the performance, there is a third Russian Doll. Tonight there is a self-portrait clue: this painting looks like a Warhol painting.

Panel Comments: Robin: “Those harmonies, I think we have three incredible singers here. I was on the Lady A training too, but then we heard the story about something traumatic happening that possibly broke them up for a team. Sugarland went through a stage collapsing accident.” Jenny: “There could be four, there could be five.” Nicole: “I was initially thinking Lady A, then that word pop, I am thinking this is a pop group. I am so confused.” Ken: “I was thinking Jackson Five.” Joel: “Maybe they will get in a fight and there will only be two next week. I think there is more to this group, I was thinking Boys II Men.”

Up next is The Raccoon, his last performance was a thrill, he never had more fun. He still can’t believe he is on a big stage, he started out as a fighter and became a champion. He trained a Hollywood leading man, then became a leading man. The Raccoon is singing, “Ring Of Fire,” by Johnny Cash. The self-portrait clue is simply a crayon drawing of The Raccoon, with bats around him.

Panel Comments: Robin: “I thought Danny DeVito, but now I am thinking Tony Danza, he has fought. He got into the business as a stuntman and then became a star.” Jenny: “Did we date? Did we have a one-night stand? Anyone that would put me on a poster that says wanted must be a big star, I think it is John Voight.” Nicole: “I am so here for The Raccoon, he is so free. I think it is Sylvester Stallone.” Joel: “I am speechless.”

Up next is the crowd-pleasing Robopine. His first performance made every quill on his back stand up, he felt like a superhero. To this day when he sees police working, they are the true heroes that made him work his whole life. Robopine is singing, “All Of Me,” by John Legend. The self-portrait is Robopine as a rocker, with a guitar and a spider.

Panel Comments: Nicole: “When you sang that song everything else stopped. Tears were streaming, and I have never been more compelled on any other season ever by any other performer, ever. I think that Brian McNight didn’t like spiders. Maybe he is Jason Derulo. That performance was unbeatable, you’ve got my heart. I put all my bets on him to win.” Joel: “You are no Raccoon. Everybody thinks he was looking at Nicole, but he was looking at me.” Robin: “That is not Brian McNight. I am getting a Blade vibe, a Wesley Snipes vibe.” Ken: “I think it could be Eddie Murphy, a throne for Coming to America.

The Seashell is next and she has the voice of an angel. It’s been ages since she has been on stage, so she was a bundle of nerves. She is so proud of herself for her solo performance. In the past, she always felt like a tiny shell in a big world. But then she met a total jock and he helped her change because she knows he is there to catch her. The Seashell is singing, “Confident,” by Demi Lovato. The self-portrait is a tornado of different things and she says she wears many hats.

Panel Comments: Nicole: “There is nothing wrong with being confident.” Ken: “Outstanding performance. I think it is Jenny Slate.” Robin: “Last time there were clues about traveling with her family, I thought Hillary Duff. But, it could be her big sister Haley Duff.” Joel: “The costume is great, I thought you were fantastic. I think it is Ashley Simpson and she is making a comeback.”

Tonight is the Wild Card round, the Orca comes out on stage. Pizza shaped his life, his punch line got him out of it. He hustled and improvised, hid his audition tapes in boxes of pizzas, and boom, that is how he accomplished his wildest dreams. The Orca is singing, “We’re Not Gonna Take It,” by Twisted Sister. The self-portrait is the Orca in a big wave.

Panel Comments: Joel: “That was my favorite one. At first, I thought Gordon Ramsey. But then I thought this was a seasoned performer, Billy Corgan from Smashing Pumpkins.” Nicole: “After that performance, I think it is Dave Grohl.” Robin: “That voice, you can’t fake that kind of voice. You can’t get to the grit on the right notes unless you know how.” Jenny: “I think it could be possibly Kevin Bacon, he is a rocker at heart. He was in Apollo 13 and his first movie, Friday The 13.”

Time to vote for the favorite will be one of the original Group A singers, or the game-changing Wild Card, Orca.

The performer with the least votes is The Raccoon.

The Raccoon is Danny Trejo, movie star, activist, and restaurateur.