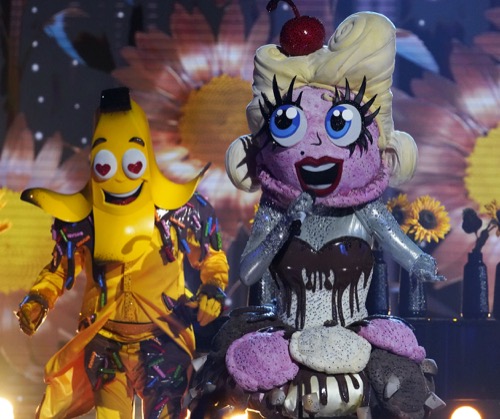 On tonight’s The Masked Singer season, 6 episodes 12 called “Group B Finale,” as per the FOX synopsis, “The final two singers from “Group B” perform solo, and then with celebrity duet partners and show panellists Nicole Scherzinger and Robin Thicke, before one is unmasked and sent home.”

In tonight’s The Masked Singer episode, its on to the Group B Finale. Nick announces that Banana Split and Queen of Hearts will be performing and then they will duet with either Robin or Nicole! Nick introduces the panel.

First, Banana Split shares some clues about their past; being insulted and having people talk about them. They take the stage to sing together and tap dance. After, they share another clue with the help of Nick Cannon. Ken thinks this has to be David Foster and Katherine McPhee. Robin thinks Leona Lewis, Ryan Tedder. Jenny thinks its the Goldblums.

Its now the Queen of Hearts turn to sing. She shares how she has been wealthy and poor and at point lived like an animal. She sings an emotional song that has Nicole and Ken shook up. Nick brings out the cannon. They get a clue about “wrestle.” Nicole thinks this is Jewel.

Banana Split shares how tough this has all been with Split keeping optimistic. They take the stage with Robin to duet. They sings a Stevie Wonder song.

The panel loved the duet. Robin learned from performing with them that Spilt has an unlimited range. They head back stage.

Its time for America to vote. The winner will move on to compete again Bull. The loser will unmask. Queen of Hearts is the winner!