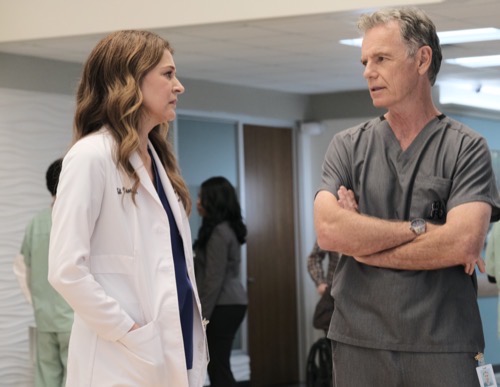 Tonight on FOX their new medical drama The Resident airs with an all-new Tuesday, January 19, 2021, episode and we have your The Resident recap below.  On tonight’s The Resident season 4 episode 2, “Mina’s Kangaroo Court”  as per the FOX synopsis, “When Cain’s elective surgery patient returns with complications, Mina and Raptor butt heads over how to handle the situation.

Conrad and Devon treat a local Congresswoman who withholds information that could prevent her from receiving proper treatment, causing Devon to open up about his grief.”

Mina tells AJ that they she wants to keep their relationship private. Devon is getting ready, he has a vision of his father. Meanwhile, Dr. Voss tells a panel that Logan Kim’s performance as CEO during the pandemic was reprehensible, he tried to coerce the surgeons to do elective surgeries while they were prohibited for the safety of staff and patients, all in the name of the bottom line. Conrad on the other hand says he never thought much of Lohan Kim, but when the pandemic hit he bent the rules to find the money and he earned his respect.

Devon is back in the hospital, Conrad asks about her mom, he says she is ok. Devon asks how the honeymoon was, he smiles and says it was good. A man rushes into the hospital, his assistant is in the car with him and she is sick. Conrad and Devon run outside and she passes out. Conrad is examining the woman, Deschelle, she is running for the first black female governor of Georgia. She tells her assistant, James, to call the office, she doesn’t want anyone coming down. Conrad tells her they are going to take some tests and get her back on the campaign trail.

Conrad bumps into Logan Kim when he is coming out of the elevator who says to him that he stabbed him in the back. Conrad says he didn’t, he told them he did good and getting fired could be a beautiful thing. Logan tells him to hang on tight, it’s going to get even uglier around there.

The hospital put up a memorial wall of all the medical works they lost to COVID, everyone gathers to remember them. Everyone gets back to work, Randolph turns to Kitt and tells her that he has come to regret a lot of bridges he has burned. She tells him to figure out which ones are worth mending and get over it already.

Deschelle is having trouble breathing, Conrad tells her to get off the phone. Devon looks down at her and he sees his dad, he spaces out for a minute.

AJ, Devon and Irving are all with Mr. Mullins, who has a blood clot in the artery leading to his heart. AJ says they have to plan for surgery, to remove the clots so he can breathe properly again.

Conrad goes to see Devon and asks why he froze up, he says jet lag. Deschelle is getting an MRI, Conrad thinks she has histoplasmosis.

Deschelle fell off the bed and is having trouble breathing, James goes to get Conrad and Devon. Conrad says something is not adding up. James tells Conrad the she is really stressed and her husband doesn’t care about her, he only cares about himself.

AJ goes to see Mr. Mullins to ask him a few questions before surgery, if he was having bowel control problems, he says no. He goes to see Barrett and tells him that Mullins is back with chronic trombone hypertension which could be result of COVID, that he probably caught there when he made Mr. Mullins think his vasectomy was urgent.

AJ says that he knows he fabricated his symptoms so that he would have to have the surgery. He goes on to say he may have stupid written on his forehead, but he knows what is going on there. Barrett said he did it to bring money in, he will do him and he should do he, let the cards fall where they may.

Conrad catches Devon hazing out again. Outside the hospital, AJ tells Mina that Barrett lied. She believes he should be fired and never practice surgery again, AJ says he needs a minute. Conrad returns to Deschelle and tells her that he doesn’t think she is telling him the truth and he needs to know everything. She asks him to feel her feet, she can’t feel them.

Conrad, Devon and Kitt are going over Deschelle’s X-rays together. AJ goes into Mr. Mullins room, he asks him what happens if his heart stops during surgery. AJ says it is a small chance and they will do their best to revive him. His wife says he hasn’t been the same since he had COVID. Then, Mr. Mullins starts to mumble and looks like he is having some kind of seizure.

Randolph stops by where his step-son works, he says he put his work ahead of his relationships and since the pandemic he has seen too many people lose their lives. He cared for him and he blew it. His step-son tells him that if he cared he would have stayed in touch, he can find someone else to hold his hand while he dies, he already mourned losing him.

Mr. Mullins had a stroke, the blood thinners should work to treat the clot, he can still go into surgery. Barrett walks in the room while Mina and AJ are looking at the xray and she blames him for Mr. Mullins condition.

Deschelle is in surgery, she has a skin irritation that looks like shingles. James tells Conrad the truth, he also has shingles but he is on meds, they were both in the Caribbean together. Conrad asks him how the meds are working, James says they aren’t. According to Conrad, that is because it is not shingles, but he now knows what they have.

Mr. Mullins is in surgery, he is brain hemorrhaging and herniating, they call Barrett, they have to do a craniotomy. After surgery, AJ and Mina are talking, he tells her that he believes that Barrett can be redeemed, and she needs to respect his decision. She asks if he is asking as her colleague or boyfriend, he says it doesn’t matter.

The CEO of Redrock is leaving his office, Kitt catches him and asks who is replacing Logan Kim as CEO he says they are not getting a new CEO.

Conrad tells Deschelle that she had a parasite, Devon tells her that she lied to them and she could have died. Conrad put her on anti-parasitics, and James is on them too. Conrad tells her that keeping secrets from her doctor can kill people. Conrad and Devon leave her. Conrad confronts Devon in the coffee room, he spoke to the resident who took care of his dad, they were understaffed. His father died alone because they didn’t have enough resources to care for him.

Mina goes behind AJ’s back and tells Mr. & Mrs. Mullins about Barret, AJ confronts her and now they are suing. Mina says she did everyone a favor. AJ says there is no favor, she disrespected him.

Conrad finds out that Nicolette is pregnant.