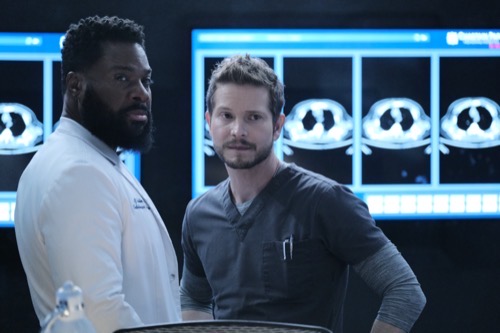 Tonight on FOX their new medical drama The Resident airs with an all-new Tuesday, January 26, 2021, episode and we have your The Resident recap below.  On tonight’s The Resident season 4 episode 3, “The Accidental Patient”  as per the FOX synopsis, “When Cain tries to be a hero at a crash scene, he is struck by a car, causing Chastain’s doctors to put aside their personal issues to try and save his life. Conrad and Nic team up to help one of the crash victims, whose secretive past makes it difficult to identify a diagnosis.

Meanwhile, Bell brings his TV crew to the hospital in hopes of garnering positive attention for Chastain, and Mina opens up to Nic, only to find out that Nic is holding on to a secret of her own.

Tonight episode of The Resident opens with Cain is in hs car, he sees a crash and stops to help. He sees someone videotaping the scene, rather than help and they don’t stop after he shouts, he walks towards them and gets hit by a car.

Dr. Bell finds out that Red Rock is selling Chastain, that is there will be no new CEO named.

Andre sits down and speaks to Mina, tells her in the hospital it has to be a professional relationship and they won’t always agree on everything. He reminds her that he is still her attending and he wants to give Cain a chance.

Nic and Conrad bump into each other on the way to the ER, he asks if she is ok, she says sure. She says it is funny, she doesn’t feel any different, and wants to get a proper pregnancy test to make sure she is really pregnant. Just then, accident victims come in, one of them is Cain. Andre walks up and sees him, Conrad tells him that he is a hero. Cain gives directions from his stretcher.

After examining, Cain can’t feel both sides of his hands the same and tells them he wants a CT scan right away. Cain is in the tunnel and tells Conrad to page Dr. Voss.

Kit tells Randolph that Cain is in imaging and it may be serious, he says nobody deserves that. Then he tells her that Red Rock is going to sell the hospital, there is no buyer, but any big corporation is going to put profits ahead of patients. He needs to show that that Chastain is more than what they think. He brings in a film crew to highlight the positive things about Chastain. Kit gets a page, she goes to attend to Cain.

Conrad does a blood test on Nic for the pregnancy test. Meanwhile, there is a victim of a fire in the ER, Devon tells him that he may not survive. The guy is shocked, he claims to feel nothing, Devon explains that his pain receptors are not working. Then he offers to call his daughter who is on his emergency list, he says no, they don’t have a good relationship.

Devon tells him about he and his father, and what he would give to have one more minute with him. The man tells Devon that he is his doctor and not his friend, just try to get him through this.

Kit walks into a room where Cain is and he tells her he knows what she is thinking, that this is karma. She ignores the comment and tells him that the sooner they can get him into surgery, the faster he can get his hand function back, that is what she is thinking. He says he knows she is the best, but he almost killed her son-in-law. She says yes he did, but now she is going to try and save his surgical career.

Mina tells Nic she needs to confide in her. She is seeing someone and he works there. Nic says it is about time and she is so happy for her.

Randolph chooses Mr. Mackay, a patient who is a social media influencer, to be his surgery that he films for Red Rock. Another patient, Eva, sees the cameras, Nic is attending to her and she says she doesn’t want to be filmed. Nic assures her that she can’t be filmed without her consent. All of a sudden the woman looks up and sees herself on the news and she freaks out. Nic is with Conrad, they call Eva’s emergency contact. The number belongs to an FBI agent, Conrad thinks she belongs to some kind of witness protection program.

Kit tells Cain that he may have a cardiac problem as well from the accident. AJ is alone with Cain, he tells him that after surgery, he hopes that he has a different outlook on life.

The FBI agent is in Chastain, Eva testified against some powerful people and she is not safe in the hospital. Meanwhile, there is a strange man wondering around the hospital and they FBI agent is worried that he is coming after Eva. The man makes it to Eva’s room, Conrad is cautious and she tells him that he is not there to hurt her, she is the one who hurt him.

Their past is that the two of them were going to get married, and then one day she was gone, no calls, no nothing. His friends said he went to fast and that is why she ghosted him. His sister saw Eva on TV and he took the first flight. She blew the whistle on where she worked, that is why she went into witness protection. Eva tells Conrad that she didn’t want to hurt him and she still thinks about him. Conrad tells her tell him, it will give her closure, all of a sudden, Eva has some kind of stroke, Nic runs to her room to assist Conrad.

Mr. Mackay is in surgery, the cameras are ready to tape it. All of a sudden, his blood pressure is rising. In another part of the hospital, Devon’s burn victim doesn’t make it and he tells Conrad he has no family, he died alone. Devon tells him that he is ok, he just needs a minute. The patient’s daughter shows up at the hospital, he did call her, but she arrived too late. She says she wanted to see him, it had been too long and she thought there would be time. They spoke on the phone, she got a chance to apologize and she thanks Devon, he told that he convinced him to call her.

Cain is in surgery, Dr. Voss is late, one of the surgeons is about to start without her. Dr. Voss is in the OR and she is upset that they started without her. She sees that they went too deep and punctured a cavity. Cain is out of surgery, but it is too early to tell how he is going to come out of it.

Eva had a mild stroke, Conrad tells her boyfriend and says they need his help. Is there anything about her medical history that can help them out. He says she would hide her stress, she would talk in her sleep and she eats off foods at weird times. As well, she would get these purple rashes on and off. Conrad and Nic figure out that she has a type of enemia. Now they can treat her after the send her blood to the lab and confirm it. Eva is with her boyfriend and tells him that she really missed him. He tells her he has a job that he hates and a bulldog he loves, can they join him. She says she would love for them to be together, but he needs time to think about this. He says he is sure.

Mr. Mackay is in surgery and bleeding perfusively, but Dr. Bell gets it to stop. And in the end, Mr. Mackay is fine. He finishes up the video and says he is so proud to be a part of Chastain. Mina says she was wrong, he didn’t bring the cameras there for him, he did it for Chastain. She asks him how can she help.

Turns out, Nic is really pregnant, it’s official. AJ and Mina are outside the hospital, she leans in for a kiss and says they are not inside the hospital. Then she tells him there is something about Chastain that he should know.