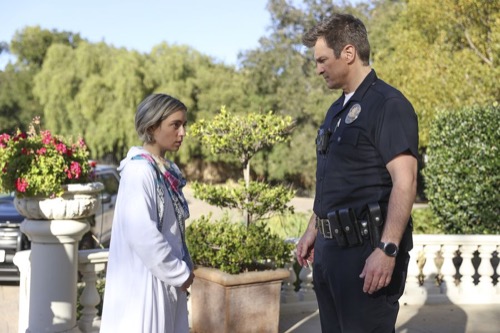 Tonight on ABC their new series The Rookie airs with an all-new Sunday, February 21, 2021, season 3 episode 6 called, “Revelations,” and we have your The Rookie recap below. On tonight’s The Rookie season 3 episode 6 as per the ABC synopsis,“Officer Nolan’s decision to return to school in order to become a training officer is proving to be much harder than he expected.

Meanwhile, Officer Chen considers going into undercover work after getting a taste of the job when Harper’s former colleague needs help.”

On tonight’s The Rookie episode Lucy has the teen she gave her car to over. She let her do her laundry. They make plans to meet tomorrow night so Lucy can help her with homework. Jackson comes in. He is out of the hospital but still bruised up.

Nolan arrives in his ethics class. It is already a bit tough for him when some students start talking about defunding the police. The next day, Nolan and Harper cover the law enforcers convention. Outside, Lucy and Tim work the incoming cars. Tim sees Mack, an old friend and cop. He is with a woman who isn’t his wife and he is high.

Smitty and Jackson work patrol. They run into a teem concerned about pot holes and the streets. Meanwhile, Harper is teaching a class last minute on female undercover after the speaker cannot make it. Lucy listens in. Tim catches her.

While calling on potholes, Jackson witnesses a man throw a woman out of her car. He takes the car. She screams about her baby being in the car. Jackson runs on foot. The man crashes and tries to run. Jackson takes him down and then realizes the woman’s baby is actually a dog. Another officer, on a horse, arrives to help. This is a first for Jackson.

Tim and Lucy meet Beth, Mack’s wife. Tim tells her that Mack has already arrived but doesn’t have the heart to share he is cheating. They look across the parking lot and see a man taking photos of the undercover police vehicles. They try to approach him but he runs. They tell the others.

Harper and Nolan think they see the man who ran from Tim and Lucy. They take him in within minutes. Meanwhile, Jackson and the officer on horseback seem to be sharing some chemistry.

Tim sees Beth pounding on Mack’s hotel door. The mistress went let her in and Mack is not responding. Tim kicks the door in and brings Mack back to consciousness. Beth leaves, she cannot do this anymore.

Outside, Nolan and Harper check in cars. One of the kids from his ethics class pulls up and is instantly rude. He didn’t know Nolan was a cop. He calls him a narc after taking some pictures for the class.

Tim scolds Mack for what is going on with him. He tells him he will get clean. Lucy and Harper talk about undercut work. Harper asks her if she wants to go for drinks. Harper gets a call from an undercover cop friend who needs help. She asks Lucy to come with her.

In class, the students bring up Nolan being a cop. He attempts to defend himself.

Lucy and Harper arrive. Harper grabs the tracker suspected on the undercover’s car. She hangs back to look for any tails. Lucy heads in and sits with the undercover, Coco. One of the men from the operation she has been trying to infiltrate arrives. Lucy goes with the flow.

He tells them he wants to go outside. Harper ambushes them. They ask him if he is a cop since he placed a tracker. He swears he isn’t. He wants them to come and taste the product. They set a time later. Lucy is excited over being undercover. She forgets about helping the teen and heads to find her, promising to help her tonight.

Jackson is called to see the teen who had reported the potholes. It looks like someone beat him up. Jackson radios to the officer on the horse that works the area. Together they track down who hurt the teen, a neighborhood hoarder with mental health issues.

Perched on a building top, Nolan and Tim spy on Lucy’s undercover sting in a parking lot. Lucy makes it through a rough spot when the top boss asks her several chemistry questions about the drugs they are selling. After money is exchanged, the team comes rushing in. Tim tells Lucy she did good.

Mack’s wife confronts Tim about turning Mack in. Jackson and the officer on horseback bring a new bike to the teen who was attacked. They make plans for a date. Nolan talks to his teacher about winning back trust from his classmates. Lucy, Coco and Harper sit and talk to her teen friend for a report she is writing.