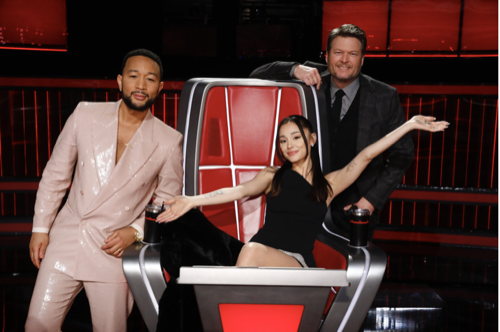 Tonight on NBC’s Emmy Award-winning musical competition The Voice airs with an all-new Tuesday, December 14, 2021, season 21 episode 26 “Live Finale, Part 2,” and we have your The Voice recap right below. On tonight’s The Voice season 21 episode 26 “Host Carson Daly reveals who America has chosen to be the Season 21 winner. The star-studded finale features special performances by chart-topping artists and finalist/coach duets.”

Tonight’s episode begins live with the season 21 coaches Kelly Clarkson, Ariana Grande, John Legend and Blake Shelton are ready and Carson Daley announcing that it is going to be a monster show of music; Jennifer Lopez, Ed Sheeran, Alicia Keys, Tori Kelly, Keke Palmer, Walker Hayes, also John is going to join Carrie Underwood, Kelly is going to join Kid Cudi, and all the finalists are going to take the stage with their coaches.

Only three coaches are going head-to-head tonight as Ariana has already lost the competition with her team all having left the already before the finale even began.

Cold Play opens the show with BTS performing “My Universe.”

We get a beside the scenes look at the youngest in the competition on Team Kelly, 14-year-old Hailey Mia. Then, Hailey sings “Funny,” by Zedd & Jasmine with her coach, Kelly.

Matthew McConaughey and Nick Crow take over hosting duties from Carson to introduce a performance that is meant to wow viewers with Tori Kelly and Keke Palmer singing “Christmas Baby Please Come Home,” from Sing 2.

It was a calculated steal and a dash of fate that kick-started the perfect Voice partnership, Jershika Maple and John sing, “O Holy Night.”

Ed Sheeran is up next with his song “Shivers (I Took An Arrow To My Heart).”

A global superstar takes the stage; Jennifer Lopez sings “On My Way (Marry Me),” where she stars with Owen Wilson in the new romantic comedy.

Carson announces that tonight’s winner and finalist in second place will each win a themed park vacation for two at their choice of Universal Studios Hollywood or Universal Orlando resort.

Ariana and Kid Cuddi take the stage to perform, “Just Look Up.”