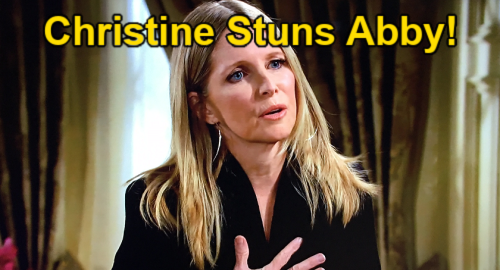 The Young and the Restless (Y&R) spoilers tease that Abby Newman-Abbott-Chancellor’s (Melissa Ordway) world will crumble over some shocking Chance Chancellor (last played by Donny Boaz) news. Christine Williams (Lauralee Bell) will drop a bomb that changes everything, so let’s talk about what’s in store.

During the week of October 18-22, Abby will find herself going through the motions. She’ll try to pretend everything’s fine with her loved ones, but she’ll really be hurting deep down.

All Abby’s pain and frustration will bubble just under the surface when it comes to this difficult Chance situation.

Abby wants her husband back home where he belongs, especially now that Dominic Newman-Abbott-Chancellor has arrived.

Abby hasn’t even had an opportunity to speak with Chance and tell him that their son was born, so it’s easy to see why Abby’s growing impatient.

Abby never signed up for this mission, which Chance accepted without even telling her.

It’s also gone on far longer than Abby ever imagined it would, so she’ll be pretty fed up. However, Christine will show up with some news that’s going to rock Abby to the core.

Ashley Abbott (Eileen Davidson) will even return for this Y&R storyline, so that tells us it’s going to be a big deal.

Abby will most definitely need her mother to lean on, so it’s good that Ashley’s about to make a comeback.

As for the news Christine delivers, there’s no confirmation on exactly what it is just yet. It’s possible that Chance has gone missing on his assignment.

Christine might reveal that Chance is gone without a trace and leave Abby terribly worried about what might’ve happened to him.

Of course, that option would still leave Abby in limbo, which wouldn’t work out all that well for the story. The better choice here would be for Chance to be presumed dead.

That way Abby could let Devon Hamilton (Bryton James) comfort her as they continue to build toward a potential romance and family with Dominic.

Whatever the case, Abby’s set to get some stunning updates that shake her up in a big way.

Chance recast plans are likely still in the works, but the best thing the show can do is have Abby move on – only to realize Chance is still alive down the road.

The Young and the Restless spoilers say Abby will have a lot to work through in the coming weeks, so you can bet Devon will continue to step up for her. That goes for Dominic, too!

CDL will have other great Young and the Restless spoilers, updates and news, so make us your favorite hotspot.