The Young and the Restless Spoilers: Adam’s Surgery Complications – Fights to Survive After Transplant?

BY Heather Hughes on May 4, 2021 | Comments: Leave Comments
Related : Soap Opera, Spoiler, Television, The Young and the Restless 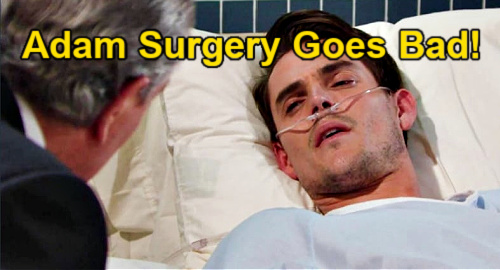 The Young and the Restless (Y&R) spoilers tease that Adam Newman (Mark Grossman) will have to put his own life on the line for Faith Newman’s (Reylynn Caster) sake.

Y&R has set Adam up as the only one with the same rare blood type within the family. To minimize the chance of rejection, Adam is Faith’s best shot at survival and the only way to keep her from landing on a kidney donor waitlist for years.

With that in mind, it looks like Adam will indeed give Faith the kidney she needs once this storm cellar crisis winds down. Of course, this is a soap and that means they want as much drama as possible.

Once Adam goes under the knife to save Faith, there’s a good chance The Young and the Restless will deliver some complications.

Faith may come through her own transplant surgery just fine, but Adam may not fare as well – particularly after he gets hit by debris in the cellar. That could leave Adam a bit worse for wear ahead of this surgery and add to the risks.

Adam may not be at 100 percent when it comes to his health beforehand, but as Nick Newman (Joshua Morrow) pointed out – Faith’s clock is ticking.

There’s no time to waste, so The Young and the Restless spoilers say the transplant surgery should move forward as soon as Adam’s back in Genoa City and ready to roll.

Will the Newmans soon receive word that Adam’s procedure hit a snag? That could bring some complex emotions for Adam’s family, especially Nick since he’ll know his brother’s making a huge sacrifice for Faith’s sake.

Sharon Rosales (Sharon Case) will be an emotional wreck if Adam’s life is in jeopardy due to the surgery. She may end up sitting by Adam’s bedside just praying that he’ll pull through.

Victor Newman (Eric Braeden) will also find himself counting on a miracle if it looks like Adam may not make it.

Victoria Newman (Amelia Heinle) and Abby Newman (Melissa Ordway) may have to examine their feelings regarding Adam’s fate as well, though it’s tough to imagine Victoria will care all that much!

Even Chelsea Lawson (Melissa Claire Egan) might find she feels less hatred for Adam than she thought under such deadly and dire circumstances.

The Young and the Restless spoilers say Adam’s kidney transplant will indeed put him at risk for complications, so we’ll see what happens in the surgery aftermath!

CDL will have other gripping Young and the Restless spoilers, updates and news, so make us your one-stop source.