The Young and the Restless Spoilers: Amanda Targeted by Father’s Killer – Next Hit Terror Attempts to Bury Truth? 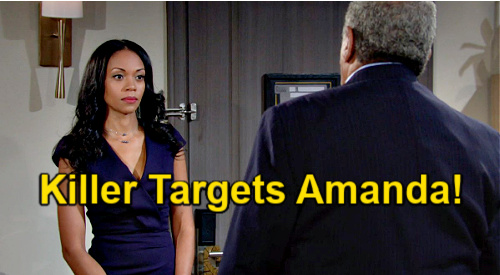 The Young and the Restless (Y&R) spoilers tease that Amanda Sinclair (Mishael Morgan) could be in over her head! Amanda filled Devon Hamilton (Bryton James) in on the murder case she’s been approached with.

It’s certainly an unusual one since Amanda’s grandfather, Sutton Ames (Jack Landron), has been accused of ordering the death of her father, Richard Nealon.

This is a messy situation for Amanda – and it’ll get even messier after Amanda meets Sutton on Monday, April 5. Amanda will find Sutton’s honesty refreshing in some ways, which is exactly what Sutton will have in mind.

Sutton won’t have any regrets about Naya Benedict (Ptosha Storey) giving up the twins, but he’ll think it’s time for Amanda to come into the family fold now. He’ll entice Amanda with the promise of acceptance and power, so she’ll indeed lean toward taking the case.

However, Devon has already warned Amanda to be careful and will remain concerned as she tackles this challenge. There are good reasons to be concerned based on Y&R spring preview info.

The Young and the Restless spoilers say the deeper Amanda digs into the past, the more problems she’ll find.

Amanda will face some troubling details and make discoveries that could prove dangerous. After all, Richard was killed because he was on the verge of exposing corruption back when he worked at Newman Enterprises.

Richard was silenced permanently, so could someone try to do the same to Amanda? If someone was willing to kill Richard back then, what’s to stop that person from doing the same to Amanda now? Digging too deep and threatening to expose the buried truth could spell trouble.

A reporter is stirring all this up for some reason and trying to implicate Sutton in the murder. Sutton has the demeanor of a smarmy politician, but he doesn’t seem guilty of killing Richard.

That wouldn’t be much of a mystery anyway – and this is indeed an intriguing mystery that we’re meant to solve.

Ashland Locke (Richard Burgi) seems like someone who’d be willing to kill over business deals, so we’re betting he’ll become the villain of this story, too.

It fits based on the timing of this character’s arc and the fact that Ashland is so cutthroat in his strategies.

Whether Richard’s car crash was ordered by Ashland or someone else, Amanda could be at risk next. Once Amanda clears Sutton’s name and closes in on the true culprit, she’ll have a target on her back.

Of course, it’s doubtful Amanda will suffer the same deadly fate as her father, but there could be an extremely close call. Some scary moments are in Amanda’s future, so she’d better be ready for anything.