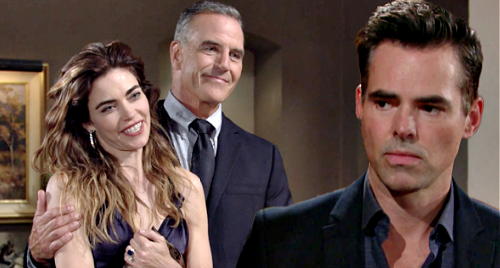 The Young and the Restless spoilers document that Victoria Newman (Amelia Heinle) had enough of Billy Abbott (Jason Thompson) on many occasions. That’s why Villy’s marriages ended and their other attempts to reconcile didn’t work out.

But Billy was the one who chose to walk away from Victoria most recently.

That happened after he decided she was never going to see him as a man, with the Billy-boy nickname that Victor Newman (Eric Braeden) applied being part of Victoria’s perceived mind set.

So, Billy’s belief that there’s something sinister in Ashland Locke’s (Richard Burgi) past is naturally something that Victoria would find to be annoying. Her feelings will increase if Billy doesn’t back off as well.

Young and the Restless Spoilers – But What If Billy Abbott Is Right?

The subject header is the big question. But being right might be a subjective conclusion in this instance.

Victor recently told Nick Newman (Joshua Morrow) and Nikki Newman (Melody Thomas Scott) that there was a woman in Ashland’s distant past. She owned television stations that Ashland purchased, which allowed him to start the Locke Communications Group (LCG).

The implication in Victor’s voice and the cautious look on his face implied that something more is coming. This is where Billy’s digging could produce some type of useful information.

Young and the Restless Spoilers – Reading Into Ashland Locke’s Words

Victor questioned Ashland’s claim of having cancer. The direct implication was that Burgi’s character was either lying about the extent of his condition or wasn’t sick at all.

Ashland offered Victor full access to his medical records, which impressed the Moustache. But there was something else that Ashland said when he was confronted by Victor in front of Victoria that was intriguing.

Victoria’s fiance speculated that in his younger days he may have employed a diabolical tactic in order to get ahead. Heinle’s character seemed surprised that Ashland would say such a thing, but didn’t press him on it.

October has been picked. The ceremony will be held in Tuscany, Italy. Newman Enterprises and LCG will officially merge one month prior.

Billy or Victor’s investigators will need to provide undeniable proof that Ashland committed some horrific criminal act in order to change Victor’s perspective. On a far more somber note, Ashland’s health could rapidly deteriorate causing him to die.

But if Ashland was simply a tough businessman, isn’t lying about his current condition, and is healthy in October, then Victoria will marry him. Billy and anyone else who doesn’t like that will simply have to accept her decision.

This site is a leading source for everything linked to The Young and the Restless. Check back at CDL regularly for Y&R spoilers and news!