The Young and the Restless Spoilers: Chelsea’s Fury Over Sharon Fuels Recovery – Gets Well Only To Dump Adam? 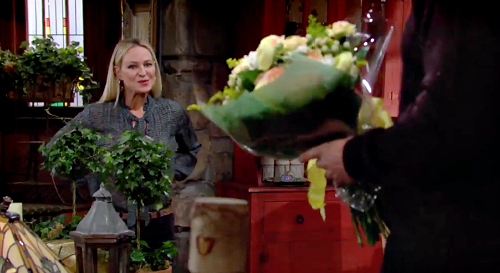 The Young and the Restless spoilers tease that Chelsea Lawson (Melissa Claire Egan) is in a very bad place right now. She’s fully conscious and aware of what’s going on around her, yet she’s a prisoner in her own body due to her stroke.

Chelsea can barely communicate her wishes, and during the week of January 18-22, something will happen that will infuriate her beyond belief.

Sharon Rosales (Sharon Case) will drop by unannounced to see Adam Newman (Mark Grossman) and to find out how Chelsea’s doing.

Chelsea will take one look at Sharon and fume internally, although she’ll be unable to communicate just how furious she is that Adam is allowing Sharon in their home. On the inside, Chelsea will scream at Sharon to get out.

Later, Chelsea will envision a worst-case scenario in which Sharon drops by again and falls into Adam’s arms and kisses him. That will result in Chelsea’s first attempt to verbally communicate as she grunts and expresses her frustration with Sharon having been in her home.

Well, something tells us that Chelsea isn’t going to like how Adam handles things in their household going forward. If Adam lets Sharon come back, then Chelsea may be pushed to her breaking point.

And even if Sharon doesn’t come back, Chelsea may worry that every text Adam gets is Sharon checking in and filling some void for him.

Perhaps this whole Sharon situation will motivate Chelsea to get better and really work on her physical therapy. As Y&R viewers know, Chelsea’s progress with physical therapy has been slower than everyone has hoped, but if Chelsea really has something to fight for, then that could jump start her recovery.

And who knows, if Adam really screws this up and his actions lead Chelsea to conclude that his attraction to Sharon is growing again, then Chelsea may want to get better just so she can let Adam have it and give him a piece of her mind.

In a way, Sharon could end up being the reason that Chelsea makes a dramatic breakthrough in her recovery!

We’ll see what happens here, but Chelsea could even get better only to end up telling Adam that they’re through. Certainly, if Chelsea believes that Adam is interested in Sharon again, she might decide that enough is enough, and once she’s well enough she could dump Adam again!

Y&R spoilers for the week of January 18-22 say that Adam will end up sending flowers to Sharon, presumably to thank her for her kindness to him right now. Rey Rosales (Jordi Vilasuso) won’t be happy about that, and if Chelsea were to somehow find out about the flowers…well, let’s just say she’ll be peeved.

At any rate, Chelsea needs some motivation to make a big breakthrough, and her anger toward Adam over Sharon just might do the trick! Stay tuned to the CBS soap and we’ll be sure to keep you up to speed on all the latest Young and the Restless spoilers, news, and updates.