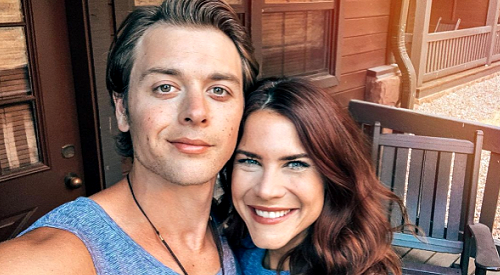 The Young and the Restless spoilers has some fun news to pass on about a popular Y&R newcomer and her Valentine’s Day loves. Courtney Hope, who portrays Sally Spectra on the CBS soap, posted two very special Valentine’s Day messages on her Instagram feed to commemorate the holiday.

One message was about her special fur baby, and the other about her significant other, General Hospital’s Chad Duell (Michael Corinthos).

Let’s start with the fur baby love. Courtney posted a couple sweet pictures and a video of her 12-year-old pup named Stevie. In the pictures and video, Steve is happily enjoying some time at the beach in Malibu along with Courtney. In the caption, Courtney revealed that she got Stevie 12 years ago on Valentine’s Day.

“Happy 12th birthday to my twin flame,” Courtney wrote. “I never thought I could love a soul as much as I love my baby girl. 12 years with this little one have been the best years of my life, and I am beyond thankful we are still creating the best memories and she is happy and healthy.”

Courtney continued, writing about how much she enjoys spending time at the beach with Stevie, concluding by saying: “Love you my little Valentine’s Day pup. Thanks for being my rock when I didn’t think I could lift my head up. You’ve shown me the light.”

A bit later, Courtney posted a sweet message about her boyfriend Chad. Courtney posted a nice picture of herself and Chad together, along with the following caption: “Happy Valentine’s Day to the love of my life. I’d choose you over and over again if I had the chance!”

Courtney continued: “Thank you for all you are. Growing, learning and loving alongside you has been more incredible that I ever imagined. Love you @duelly.” To that, Chad replied in the comments, saying, “I love you.”

Courtney has received a lot of fan love for both her posts, with many of her followers commenting on how sweet Stevie is and what a great couple Courtney and Chad are.

It looks like it was a very special Valentine’s Day for them all! Stay tuned to the Young and the Restless and we’ll keep you current on all the latest soap spoilers, updates, and news.