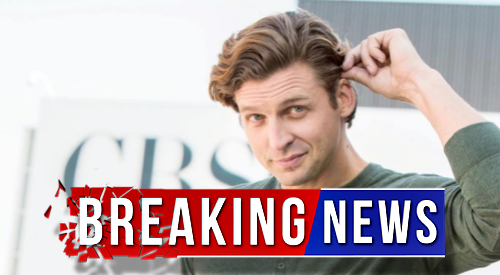 The Young and the Restless spoilers has some sad breaking news to pass on. Donny Boaz, who portrays Chance Chancellor on the CBS soap, has informed his social media followers that he’s been fired from Y&R and that his last day on screen will be on Monday, February 1.

Donny told his Instagram followers that “I’d love to say that this was my choice, that I’ve booked the next big project and leaving of my own accord…but that wouldn’t be the truth.”

In his lengthy caption, Donny explained the timeline of his departure, saying that he first heard the news from TPTB on December 24, when he received a phone call saying that Y&R wasn’t going to renew his contract for another cycle.

Interestingly, Donny reported in his post that he was told that Chance was not being replaced or killed off, but that he just disappeared.

Donny went on, saying that because of the ongoing costs associated with COVID testing, “production is set to let go of 4 or 5 contract players” and that “due to the writers and future story line…I didn’t make the cut.” Boaz has since edited his original statement to delete this part.

Donny’s post had a tone of general disbelief about his firing, as he explained that he thought for sure that since Chance and Abby Newman-Abbott-Chancellor (Melissa Ordway) had just married, were having a baby, and were blessed by Victor Newman (Eric Braeden) that he was safe. “I was wrong,” Donny explained.

Donny did say that he’s not angry or bitter, but that he’s sad with the situation, and he made a special point to thank the fans. “You have all been AMAZING,” Donny said.

Finally, Donny expressed sadness for not being able to see Chance and Abby’s storyline through.

Of his co-star Melissa Ordway, Donny said, “Working with you has been my absolute pleasure and I can easily say that you are one of the greatest actresses I’ve ever had the privilege to work with.”

This is certainly startling news for Y&R fans who had become invested in Abby and Chance’s surrogacy storyline with Mariah Copeland (Camryn Grimes).

It’s certainly a strange turn of events for all this buildup over Chance and Abby having a baby, only to have things abruptly end for the couple and for Chance to disappear.

Given that Monday, January 1 will be Chance’s last episode, we can report that Chance will last be seen taking a mysterious phone call after he asks Abby for some time alone. This will follow Chance learning that he cannot father Abby’s baby due to low sperm count and motility issues.

And given Donny’s comments in his Instagram post, it looks like Abby will probably return to the Chancellor mansion on Tuesday’s episode only to find Chance missing with no real explanation for where he is.

Something tells us that viewers are going to find this to be a frustrating way to round out Abby and Chance’s story!

At any rate, Donny Boaz is soon gone from Y&R. Are you surprised by Donny’s abrupt departure from the show? Stay tuned to the CBS soap and be sure to check CDL as often as you can for the latest Young and the Restless spoilers, updates, and news.