The Young and the Restless Spoilers: Imani & Sutton in Cahoots – Devon Witnesses Duo Conspiring Against Amanda

BY Heather Hughes on May 1, 2021 | Comments: Leave Comments
Related : Soap Opera, Spoiler, Television, The Young and the Restless 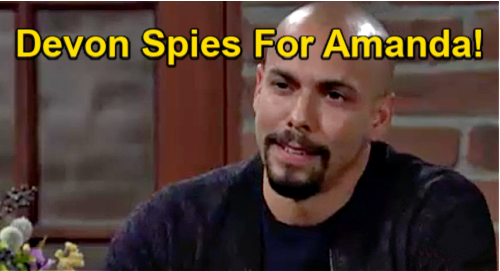 The Young and the Restless (Y&R) spoilers tease that Devon Hamilton (Bryton James) will witness a secret meeting that looks incredibly suspicious. Y&R fans know Imani Benedict (Leigh-Ann Rose) has been nothing but trouble so far.

Imani blew up upon first learning about Amanda Sinclair’s (Karla Mosley) existence and ultimately took out a restraining order on her.

Although Imani later dropped that restraining order, The Young and the Restless fans know she didn’t drop her grudge against Amanda. Now Imani wants Amanda to bail on Sutton Ames’ (Jack Landron) case and stay away from her family.

It’s supposedly to spare Amanda the humiliation of being cast aside later, but what Devon sees will lead to doubts about Imani’s story and motives.

At The Grand Phoenix, Devon will spot Imani and Sutton having a discussion. He won’t be close enough to hear what Imani and her grandfather are saying, but he just won’t like the look of this interaction.

Alarm bells will go off for Devon, who’ll think it seems like Sutton and Imani are conspiring against Amanda somehow.

Once Devon realizes Imani and Sutton may be in cahoots, he’ll be nervous about Amanda getting hurt as a result. Imani will get on the elevator, so Devon will assume she’s headed up to Amanda’s suite again.

That’ll cause Devon to whip out his phone and warn Amanda about Imani’s impending arrival.

Devon will think it’s best to give Amanda a heads-up under the circumstances. Up in Amanda’s room, she’ll be taken aback when Imani offers an apology for her behavior up to now.

Imani will want to make things right by pitching in on Sutton’s case. Since Imani studied law and just never took the bar exam, she’ll feel like she could be useful to Amanda and the legal team backing her up.

After Imani leaves and Devon explains the suspicious conversation he saw, Amanda certainly won’t trust her half-sister at all.

Even so, Amanda will consider accepting Imani’s offer on The Young and the Restless. She’ll think maybe it’d be wise to get a bit closer to Imani and see if she can figure out what’s really going on.

Devon will feel like Amanda could land in some trouble if she’s not careful, so he’ll warn her to keep her guard up. The Young and the Restless spoilers say there’ll be a growing lack of trust here, so Devon will definitely want to protect Amanda as best as he can.