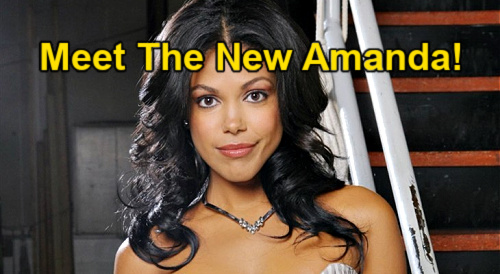 The Young and the Restless (Y&R) spoilers reveal that Amanda Sinclair (Mishael Morgan) is getting a new face – but only temporarily. Y&R fans may have heard by now that Mishael Morgan recently suffered an eye injury and had to have emergency surgery.

That left Morgan with a large bandage and required recovery time, so someone had to fill in for her on set.

Amanda is in the middle of a huge storyline, so it was important to get a quick recast and keep the drama going strong. Fortunately, The Young and the Restless found someone who’ll be familiar to many CBS soap fans – at least those of us who are also longtime viewers of The Bold and the Beautiful!

Karla Mosley previously played Maya Avant on B&B, but now she’s been tapped as a temporary Amanda recast according to SOD. Mosley is a fantastic actress who’ll no doubt do a great job.

Mosley’s got a powerful screen presence and played plenty of intense stories on The Bold and the Beautiful, so she should have no problem sliding right in Amanda’s family drama.

Of course, this is still Morgan’s role and will be waiting for her to reclaim as soon as she’s ready. This is just about securing someone to take over in the meantime, so Mosley is an excellent choice.

As for when Mosley will make her debut, Y&R fans won’t have to wait too long. The Young and the Restless spoilers say Mosley will first appear as Amanda starting April 26.

There’s no news yet on when Morgan might make her comeback, but we can enjoy Mosley’s unique spin on the character until then.

Amanda recently decided to take on a case that’s sure to bring other twists and turns along the way. Sutton Ames (Jack Landron) claims he’s innocent of Richard Nealon’s murder, but it still seems like he’s got a few buried secrets.

Amanda is eager to uncover the details of her father’s fatal car crash and the real murderer who ordered it, so some bombshells are definitely brewing.

It’s a good thing Mosley’s filling in since this is one of Y&R’s most intriguing storylines right now!