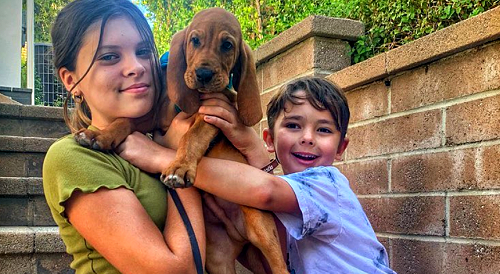 The Young and the Restless spoilers reveal that Michelle Stafford (Phyllis Summers) has adopted a new family member. The actress confirmed the exciting news on Instagram with a photo of the adoptee posing with Stafford’s children. The photo was simply adorable and some fans and co-stars already have name suggestions.

Y&R spoilers reveal Stafford’s children proudly holding up a brown puppy. Despite it still having a babyface, the dog actually looks like it might be a medium or large-sized pet. We’re not sure about the breed, but the animal has very long ears!

Stafford mentioned that with the dog now a member of their family, she explained that her house is now “ a legit circus.” The dog still looks pretty long and the gender was stated.

However, based on the names submitted in the comments section, it’s probably a boy. Puppies have a lot of energy and the bigger breed they are, the messier one’s house will be!

The Young and the Restless Spoilers: Name Suggestions

At the time the Y&R star posted the photo, which was on August 2, the dog still didn’t have a name. The comments section was filled with all kinds of ideas. Tracey E. Bregman (Lauren Fenmore Baldwin, Y&R) suggested the name “Nash” since he’s from Nashville.

One comment thanked Stafford for adopting and not shopping. That individual added that adoption was the “best breed.” We would like to send our congratulations to Stafford and her family on their new adopted furbaby!

What do you think of the soap star’s newest family member? What are your best ideas for a name?