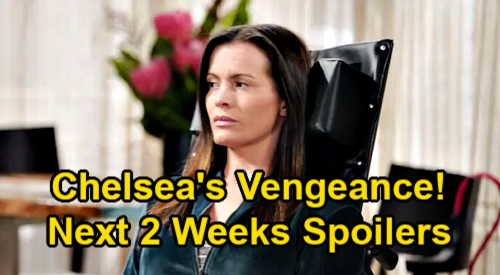 The Young and the Restless (Y&R) spoilers for the next two weeks tease that the drama’s about to heat up in Genoa City. During the week of March 1-5, Victor Newman (Eric Braeden) will work on building a bigger empire.

This probably involves locking in Ashland Locke’s media company as part of Newman Enterprises and hiring Adam Newman (Mark Grossman) to run it.

Adam’s indeed set to get back into the Newman fold soon enough, so it makes sense for Victor to pit him against Billy Abbott (Jason Thompson) like this. As for Victor Newman (Amelia Heinle), Victor has already been working to get her on his side.

Victor feels like Victoria has it in her to be a true Newman and destroy Billy in business despite how she might feel about him personally.

Of course, any progress Victor might make could go out the window once Adam becomes part of the deal. Victoria isn’t going to approve of Adam being anywhere near Newman Enterprises, so there should be some clashing.

Lily Winters (Christel Khalil) may also spar with Victoria in the week ahead since Y&R spoilers say she’ll deliver the harsh truth about something. Lily will want Victoria to know exactly where she stands, so there’s the potential for a showdown regarding their dueling companies, Billy or both.

Other Young and the Restless spoilers say Phyllis Summers (Michelle Stafford) will try to get Sally Spectra (Courtney Hope) fired from Fenmore’s.

Phyllis will call attention to Sally’s Abbott family snooping on the Internet and how she’s latched onto Jack Abbott (Peter Bergman). Lauren won’t think Phyllis has given her any evidence that’d force her to do something as drastic as let Sally go.

Even so, Lauren might question Jack about his involvement with Sally and wonder if he really thinks it’s a good idea. If not, Phyllis will surely have something to say as Jack and Sally’s bond grows.

Even Kyle Abbott (Michael Mealor) could lecture his dad, but Jack will rush to his own defense in the coming episodes.

This is Jack’s life and he’s having fun, so there’s no reason he can’t go on a few dates with Sally and see where it leads. Next, Chelsea Lawson (Melissa Claire Egan) will dream of vengeance.

It sounds like Chelsea will imagine scenarios in her head where Adam pays the price for breaking her heart.

Chloe Mitchell (Elizabeth Hendrickson) will finally figure out Adam and Sharon Rosales’ (Sharon Case) connection is the problem, so maybe she can become part of Chelsea’s actual plan for revenge. Chelsea will score a victory later, so she might give Adam a little taste of what’s headed his way.

Other Young and the Restless spoilers say Devon Hamilton (Bryton James) will hide a secret and battle guilt as a result. Amanda Sinclair (Mishael Morgan) might talk to Devon about how glad she is that he put Elena Dawson (Brytni Sarpy) behind him.

In reality, Devon may find himself thinking about that hot night in the ice storm more than he’d like to admit.

As for Summer Newman (Hunter King), she’ll face the truth about Kyle’s three-year-old son. After a run-in with Tara Locke (Elizabeth Leiner) gives Kyle confirmation that Harrison Locke is his child, he’ll tell Summer the truth and hope their relationship isn’t blown apart.

However, some news could be headed Abby’s way since Christine Williams (Lauralee Bell) will stop by.

Will Christine have updates regarding Chance Chancellor’s (Donny Boaz) mission? It’s possible since Abby will use Christine and Nina Webster (Tricia Cast) as her support system.

There’s a chance Abby will face a tough blow – like Chance going missing or being presumed dead on his mission. Whatever the case, Abby will have Christine and Nina to lean on.

During the week of March 8-12, Jack will do something big and bold. He’ll decide to make a rather risky move, so that could involve kissing Sally or even inviting her to spend the night with him. Sally seems down for taking things as far as Jack would like, so his gamble might pay off.

Back with Chelsea, she’ll take another vengeful step forward while Adam gets ready for war alongside his father. Adam and Victor will grow closer as they gear up for what we can assume is a Billy battle!

As for Sharon and Rey Rosales (Jordi Vilasuso), they’ll end up in couples therapy despite Sharon’s initial reluctance. Iris (Kathryn Browning) the marriage counselor will do her best to help Rey and Sharon salvage their marriage.

Finally, Devon will end up at a crucial juncture. He’ll have to make a decision that could take him down one path or a completely different one.

Since Devon hasn’t truly put Elena behind him, he may need to figure out if he wants to recapture that spark or truly move forward with Amanda.