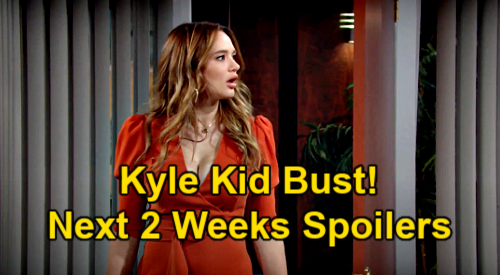 The Young and the Restless (Y&R) spoilers for the next two weeks tease that suspicions will be on the rise in Genoa City. During the week of February 15-19, Rey Rosales (Jordi Vilasuso) will suspect that Sharon Rosales (Sharon Case) has ulterior motives for helping Chelsea Lawson (Melissa Claire Egan).

It’ll be clear to Rey that Sharon always puts Adam Newman (Mark Grossman) first – and Rey will be sick of it.

After Rey gives Sharon an ultimatum and insists he doesn’t want her seeing Adam again, Sharon will run into Adam at Society. Once Sharon admits Rey’s worried about the lingering feelings between them, Adam will pull Sharon toward him a plant a steamy kiss.

Sharon will eventually shove Adam away and insist he needs to steer clear of her. We’ll see Sharon strengthen her resolve to fix things with Rey, but Mariah Copeland (Camryn Grimes) will sense trouble in paradise.

Once Mariah blabs to Nick Newman (Joshua Morrow) about her concerns, they’ll agree Adam is undoubtedly the problem.

The Young and the Restless spoilers say Nick will decide to confront Adam at his penthouse, where Chelsea will be able to hear all Nick’s accusations. Nick will warn Adam to stay away from Sharon, so Chelsea will be more convinced than ever that an affair is going on.

Meanwhile, Rey will confide in Lola Rosales (Sasha Calle), who’ll be upset to learn Rey and Sharon are already having issues in their marriage. In fact, Rey will confess that marrying Sharon may have been a mistake.

As for Faith Newman (Alyvia Alyn Lind), she’ll get suspended from school after vodka is discovered in her locker. Y&R spoilers say Faith will get grilled by her parents, but she’ll assure Nick and Sharon that bullies set her up.

Faith will explain that she’s being tormented by all her haters – and this is their latest strategy to hurt her.

Afterward, Faith will receive a horrifying text that features a pic of Sharon and Adam’s lip lock. Once Faith shows that photo to Sharon, she’ll wonder how Sharon could kiss that monster! Faith will flip out and say some pretty rude things that Sharon won’t be happy about.

Even so, Sharon will carry shame about the kiss with Adam and will know she’ll have to tackle this topic with Rey. Look for Rey to have a fierce faceoff with Adam as well as a heated confrontation with Sharon.

Nick will worry that Adam’s already managed to destroy Sharon and Rey’s happiness, but maybe that happiness has always been a bit of an illusion.

Sally Spectra (Courtney Hope) will be stunned when she spots The Bold and the Beautiful’s Bill Spencer (Don Diamont) in the Jabot boardroom.

Bill will be there with Lauren Baldwin (Tracey E. Bregman) and Jack Abbott (Peter Bergman), but Sally won’t stick around to find out what’s said at the meeting.

Sally will quickly run out of the building, so Bill will drop hints about his history with Sally to Lauren and Jack. Lauren already knows part of what happened in LA, but she’ll decide that maybe it’s time to hear the rest.

Jack, on the other hand, may think there’s no need since Sally’s all in on this new beginning of hers. Whatever the case, it doesn’t look like Bill will spill enough to destroy Sally’s world, but he’ll make it clear that he has the power to do so.

Bill and Sally will have a chilly encounter at Society later – and then Sally will have to deal with Lauren’s questions. Jack will continue to defend Sally, so she’ll appreciate having a champion like Jack to count on.

After Kyle Abbott (Michael Mealor) reveals his old affair with Tara Locke to Summer Newman (Hunter King), he’ll neglect to mention the three-year-old little boy they might have together.

Kyle will open up to Mariah Copeland (Camryn Grimes) about the kid and worry about the possibility that Theo Vanderway (Tyler Johnson) was really telling the truth.

Once Kyle seeks info on his potential son, Harrison, he’ll get busted with a pic of the kid on his laptop. That’ll force Kyle to offer answers he’s not ready to give, so he might have to tell Summer more lies for now.

As for Amanda Sinclair (Mishael Morgan), she’ll sleep with Devon Hamilton (Bryton James) and get reassurance that she’s not some passing fling for him.

Next, Elena Dawson (Brytni Sarpy) will confess to Nate Hastings (Sean Dominic) about cheating with Devon during the ice storm – and once Elena’s back from her tropical getaway, she’ll tell Devon that Nate knows.

Back with Amanda, she’ll face a painful yet tempting offer. Naya Benedict (Ptosha Storey) will insist she’d like to get to know Amanda better, but only if they can keep their meetings under wraps.

It sounds like Naya won’t want to rile up Imani Benedict (Leigh-Ann Rose) or the rest of her family, so any Amanda bonding will have to be done in secret. Amanda will need some time to mull over that offer, but it looks like she’ll strike the deal.

During the week of February 22-26, Amanda will indeed meet with Naya. Things will be tense as they continue trying to sort out their relationship and what it might look like.

Other Young and the Restless spoilers say Sharon and Rey’s marriage will be in jeopardy. Thanks to all the Adam hits they’ve been taking, it’ll be make-it-or-break-it time for this couple.

Since Sharon’s always going to be drawn to Adam and Rey’s always going to have a problem with it, “Shey” seems doomed! Chelsea’s world will be upended, so could Chloe Mitchell (Elizabeth Hendrickson) reluctantly show her the “Shadam” kiss photo?

One way or another, Chelsea should get confirmation that her worst fear has come true.

Abby might face some of those as well since Chance Chancellor (Donny Boaz) won’t be home for quite some time. A tough choice will be made by Abby, so we’ll see if she wavers on her surrogacy plans.

Next, Victor will find himself in a position where he has to control the damage. Since Adam is Victor’s son, another Newman scandal may erupt due to that “Shadam” smooch evidence.

Over with Sally again, she’ll want the scoop on Jack’s past. Sally will do a little digging and perhaps arm herself with some of Jack’s old mistakes – just in case her own LA mistakes cause drama.

It’d be smart for Sally to figure out how she can highlight Jack’s flaws and compare his blunders to her own. Nobody’s perfect, so Sally still deserves a chance to restart her life in GC.

Finally, Summer will get a warning that leaves her concerned. An alarming message is headed Summer’s way, so this may tie in with the looming Tara and Ashland Locke mayhem.