The Young and the Restless Spoilers: Nick Calls Out Jealousy Over Sally – Accuses Phyllis of Wanting Jack Back? 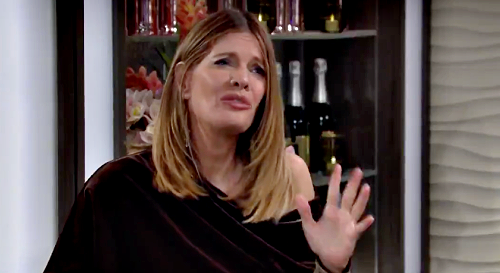 The Young and the Restless (Y&R) spoilers tease that Nick Newman (Joshua Morrow) could soon have a new reason to be concerned about his relationship. Y&R fans know Nick doesn’t approve when Phyllis Summers (Michelle Stafford) takes her schemes too far.

Although Nick likes Phyllis’ feisty side and determination, there are limits to what Nick will tolerate.

When Nick first met Sally, he didn’t seem to view her as some big threat. However, Phyllis is clearly concerned about Sally making more trouble for Summer Newman (Hunter King) – and getting too close to Jack Abbott (Peter Bergman)!

As Jack and Sally begin dating, The Young and the Restless spoilers say the news will spread and leave Phyllis even more worried. Phyllis surely won’t want Sally latching onto Jack in this way, especially since Jack is Kyle Abbott’s (Michael Mealor) father.

This will be all kinds of complicated in Phyllis’ eyes, so she’ll want to stop Jack and Sally from bonding any more than they already have. Summer should pitch in on this, but there’s no doubt that Phyllis will be running the show here.

Phyllis will take the lead on trying to drive Sally and Jack apart, but there could be unexpected consequences.

Nick could easily have the power of old loves on his mind after Sharon Rosales (Sharon Case) and Rey Rosales’ (Jordi Vilasuso) marriage blows up due to Adam Newman (Mark Grossman).

Since Jack remains such an important part of Phyllis’ life, that could be a factor in all this. Nick might find himself fretting over the possibility that Phyllis is drifting back toward Jack like Sharon did with Adam.

Nevertheless, it’s Phyllis overprotective nature when it comes to Jack that might be the real problem. Nick may call Phyllis out for being jealous of Sally and wonder if it’s because Phyllis still has feelings for Jack.

Phyllis could easily feel familiar love bubble up again and complicate her own plot to shove Sally aside.

Although Phyllis won’t want to lose what she’s rebuilt with Nick, “Phick” could take a serious hit if Nick feels like Phyllis is trying to steal Jack back. Whether it’s true or not, the accusation alone could take a toll on Nick and Phyllis’ relationship.