The Young and the Restless Spoilers: Noah And Sally Heat Up – Adam Jealous as New Sparks Fly? 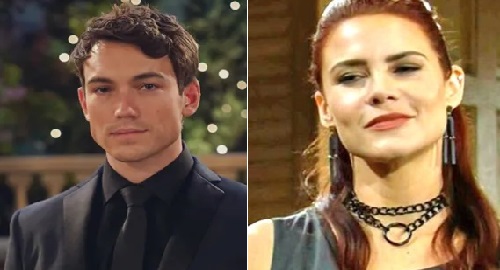 The Young and the Restless (Y&R) spoilers tease that Noah Newman (Rory Gibson) may rise to Sally Spectra’s (Courtney Hope) challenge, but will Adam Newman (Mark Grossman) get jealous as new sparks fly?

Y&R fans know Adam’s been pushing Noah to take on more projects at Newman Media, but Noah isn’t really interested. He didn’t enjoy being micromanaged and would rather take this opportunity to figure out what’s next in his career anyway.

However, that didn’t stop Sally from urging Noah to do some work for the fashion platform. Although Sally was a bit pushy on the December 6 episode, Noah didn’t seem to mind. Sally’s determination earned a smile from Noah, so he actually seemed rather entertained by her can-do spirit.

There’s certainly the potential for Noah and Sally to be paired up romantically at some point, especially considering the lack of women in his age range on the show. It almost feels inevitable that Sally and Noah are going to end up together in some form.

That doesn’t necessarily mean things will get serious, but Sally and Noah’s recent office scene perhaps already counts as flirting. There’s the opportunity for Y&R to build on that with a hot hookup or perhaps even a real relationship.

Whatever the case, Adam was quick to complain about Sally coming on too strong – though it seemed like a hint of jealousy was going on if you ask us! There was no reason for Adam to gripe about Sally’s fight to lock in a talented team member.

Adam normally would’ve supported Sally in a move like that, so perhaps he just didn’t like the idea of her cozying up to another man. Despite Adam’s attempts to push Sally away, it’s clear that he has some complicated feelings for her.

Those feelings could get even more complicated as more jealousy erupts. The Young and the Restless spoilers say Noah’s on the verge of accepting a new assignment. That’s noteworthy since Noah already accepted Tessa Porter’s (Cait Fairbanks) gig designing her cover art.

Noah wouldn’t need to accept that again, so maybe this spoiler is about a truly NEW assignment. That means Noah might decide to tackle a challenge for Sally after all. Sally just might corner Noah and talk him into it – much to Adam’s dismay!

Adam pointed out Sally would have to get in line since he has other projects that he wants Noah working on first, but maybe Noah will particularly like Sally’s vision. It’d be a great way to set up another round of jealousy – plus, it could ignite something sizzling between Noah and Sally.

As other news and updates emerge, we’ll keep you in the loop. The Young and the Restless spoilers say there’s still hope for Sally and Noah’s romance, so stay tuned. CDL’s where you want to be for exciting soap spoilers, updates and news, so make us your one-stop source.