The Young and the Restless Spoilers: Phyllis’ Wild Thanksgiving Journey – From Nick to Summer – Gloria Leads The Way 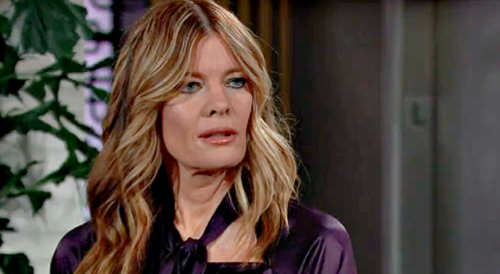 The Young and the Restless (Y&R) spoilers tease that Phyllis Summers (Michelle Stafford) will have a wild dream where Gloria Fisher-Bardwell (Judith Chapman) leads the way. Jealousy and loneliness will bring a Thanksgiving journey for Phyllis, so let’s talk about what’s in store.

For starters, Phyllis will bump into Gloria at The Grand Phoenix. Gloria will act like it’s so sad that Phyllis is all alone on Thanksgiving, so she’ll make Phyllis feel insecure about spending the holiday by herself.

That could be what prompts Phyllis’ trip to Crimson Lights, where she’ll see that Sharon Rosales (Sharon Case) is making preparations for her annual Thanksgiving meal for the homeless.

Despite the usual bickering between them, Phyllis will offer to pitch in.

That news will surprise Sharon, who’ll be grateful for an extra pair of hands and will respond with kindness.

However, the situation will head downhill after Nick Newman (Joshua Morrow) walks in. Nick will be cordial to Phyllis, but the awkwardness will still be tough to take.

Phyllis will also have to watch Nick and Sharon getting along so well.

Even though nothing romantic is going on between Sharon and Nick at the moment, Phyllis will be a bit jealous of their easy connection.

It’ll serve as a difficult reminder of Phyllis’ romantic failure, so she’ll just bail and head back to her hotel suite.

That’s where Phyllis will make phone calls to Summer Newman (Hunter King) and Daniel Romalotti (Michael Graziadei), but that won’t be enough to ease the pain of her lonely Thanksgiving.

If anything, it’ll probably just make Phyllis sadder to know her kids are off living their best lives without her.

Phyllis will decide to turn in early, so she’ll get in bed and drift off – only to seemingly wake up moments later over someone banging on the door.

Gloria will ultimately enter wearing a wacky outfit, so Phyllis will wonder what the heck is going on!

Y&R spoilers say Gloria will have a lesson to teach, so she’ll take Phyllis on a journey around town and help her see the light.

This could involve a “ghosts of exes past” type of situation where Phyllis has to face old demons and move forward.

Phyllis may also have to see that she can’t rely on other people to make her happy – nor can she let them steal her own joy.

By working on herself first, Phyllis could potentially have a healthier relationship with Jack Abbott (Peter Bergman) when the time is right for a romantic reunion.

Whatever the case, Phyllis should eventually wake up all over again and realize this bizarre trip around Genoa City with Gloria has all been a dream.

The Young and the Restless spoilers say Phyllis will have to do some soul-searching, so stay tuned.

CDL’s where you want to be for terrific Young and the Restless spoilers, updates and news, so make us your number one source.