The Young and the Restless Spoilers Recap: Thursday, February 25 – Faith Moves In With Nick – Abby Says Yes To Devon 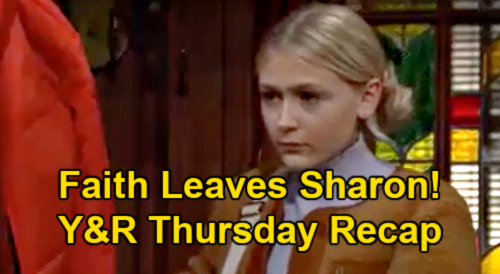 The Young and the Restless spoilers recap for Thursday, February 25, tease that Phyllis Summers (Michelle Stafford) and Nick Newman (Joshua Morrow) will confer at the Grand Phoenix as Nick’s getting ready to go pick Faith Newman (Alyvia Alyn Lind) up at Sharon Rosales’ (Sharon Case) house.

Later, Naya Benedict (Ptosha Storey) and Amanda Sinclair (Mishael Morgan) will have another meeting in the lobby. Naya and Amanda will share their college stories, and Naya will be proud of Amanda and her accomplishments.

Things will be going well until Amanda asks if Naya would do things differently, and Naya won’t know how to answer the question.

Amanda will get ruffled, but she’ll quickly apologize, and Naya will say that she wants to come back to get to know Amanda better. Amanda and Naya will leave on decent terms.

Meanwhile, over at Sharon’s house, Nick will show up to get Faith, and he’ll learn that Rey slept at the station last night. Nick will be appalled when Sharon says that Adam stopped by last night.

Faith will soon emerge with a big bag packed, and Nick will put it in the car while Sharon tells Faith that she’ll do her best to work things out with Rey. Faith won’t be able to find her phone, and Nick will have it, saying that he’s holding onto it while Faith gets a new phone and a new phone number.

Faith won’t be impressed, and she’ll refuse to cough up the names of the girls who are bullying her.

Nick and Faith will head to the Grand Phoenix, where Phyllis will give Faith a spa day. Faith will be thrilled, and she’ll have her new phone in tow. Faith will step away, and Phyllis will tell Nick that she thinks that Sharon will eventually get her act together, and that Sharon’s a good mom.

At the Chancellor mansion, Nina Webster (Tricia Cast) and Abby Newman-Abbott-Chancellor (Melissa Ordway) will discuss what it might be like to raise a biracial child given that there are racist people out there.

Abby will say that she’d want Devon Hamilton (Bryton James) to be a part of the baby’s life, and she’ll feel like Katherine Chancellor (Jeanne Cooper) would give her blessing.

Later, Devon will arrive, and Abby will initiate a conversation about race, and Devon will explain that Cane Ashby (Daniel Goddard) and the twins were different races and they have made the situation work wonderfully.

Abby will tell Devon that she wants him to be a part of the baby’s life, and that she’s accepting his offer.

Mariah Copeland (Camryn Grimes) will stop by, and she’ll learn that Abby said yes to Devon being the donor. Together, Abby, Nina, Devon, and Mariah will toast to the soon-to-be baby Chancellor before talking about how each party needs their own contract and lawyer so that everyone’s interests are protected.

Mariah will head to Crimson Lights where she’ll find Sharon. Sharon will disclose that Faith went to live with Nick, and Mariah will tell Sharon about Devon being the donor for Abby and Chance Chancellor’s (Donny Boaz) baby.

Sharon will get a text from Rey saying that he wants to talk after work, and Sharon will be hopeful.

Back at the Grand Phoenix, Devon will meet with Amanda, and after hearing about her visit with Naya, he’ll ask her to be his lawyer for the baby matter.

Amanda will go into lawyer mode and she’ll insist that Devon get all terms hammered out in a contract, since people and their desires change. “You need a good contract to all stay friends,” Amanda will say.

Thursday’s episode sounds great, so stay tuned! Remember, CDL is your go-to place for the latest Young and the Restless spoilers, updates, and news. We’ve got you covered!

Preview for next week. #YR pic.twitter.com/BOeo3xlZ1W