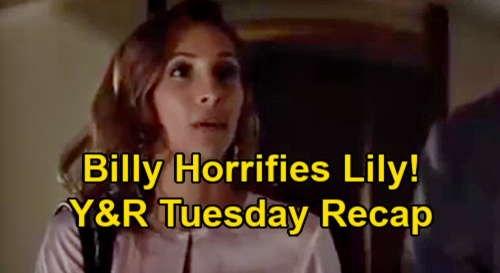 The Young and the Restless spoilers recap for Tuesday, January 12, tease that Abby Newman-Abbott-Chancellor (Melissa Ordway) will be awake overnight at the Chancellor mansion with nausea.

Abby will be miserable, and but then she’ll realize that this could be morning sickness and she’ll get excited. Soon, Abby will decide to take her last remaining pregnancy test at the mansion.

It wasn’t long be long before Abby comes back downstairs and tells Chance Chancellor (Donny Boaz) that the test was negative. Abby will promptly send Chance to the overnight drugstore for another pregnancy test.

Unfortunately, that test will be negative as well, and Abby will be bitterly disappointed. Abby will announce that she’s going to call her gynecologist and make an appointment, and that they need to do everything they can to speed up the process. Chance will think that may be unnecessary, but he’ll agree for Abby’s sake.

At the Grand Phoenix, Amanda Sinclair (Mishael Morgan) will sit down with Naya Benedict (Ptosha Storey) for the full scoop about her conception, birth, and abandonment.

Naya will begin by telling Amanda that she was unfortunately a mistake, and she’ll tell the story of her family being very religious and her parents being wholly in charge of what happened to Amanda and Hilary Hamilton (Mishael Morgan).

Naya will also say that she felt remorse, and that she always knew that Amanda’s father would have no part in her life.

At this point, Amanda will ask about her father, and Naya will say that he was “just a boy” and that he died in a car accident a year after Amanda and Hilary were born.

Amanda will lash out over never knowing Hilary, and she’ll rant that she deserves to be known and loved. “You missed out!” Amanda will cry. Naya will then start to say that she wished for something, but just then Imani Benedict (Leigh-Ann Rose) will pound on the door.

Amanda will get the door, and Imani will storm in, ranting about Amanda’s “scam” and wondering why Naya is there.

Ultimately, Naya will tell Imani that Amanda is her daughter, and Imani will be stunned, saying that it can’t be true. Imani will leave upset, and Naya will say that while saying “I’m sorry” is inadequate, that’s all she has to offer.

Amanda will ask what Naya was going to say that she wished for, but Naya will simply leave in silence.

On the Jabot jet, which will still be stranded in Colorado, Billy Abbott (Jason Thompson) and Summer Newman (Hunter King) will chat while Lily Winters (Christel Khalil) and Kyle Abbott (Michael Mealor) are sleeping during the layover.

Billy will be happy that Summer is running JCV, and soon he’ll broach an uncomfortable topic.

Billy will apologize for what happened between them previously, and Summer will graciously accept the apology, saying that she wasn’t blameless and that she’s changed and grown, too. When Summer and Billy are through talking, Lily’s eyes will open, and she’ll have overheard the exchange.

Later, the jet will finally have reached Los Angeles, and Kyle and Summer will deplane. Lily will ask Billy what happened between him and Summer, and Billy will readily admit that he slept with Summer after he found out that Phyllis Summers (Michelle Stafford) cheated on him with Nick Newman (Joshua Morrow).

Lily will be shocked, and she’ll need some time to process the news.

At the hotel in Los Angeles, Kyle and Summer will settle in, and Summer will tell Kyle about forgiving Billy. Summer and Kyle will then get playful and end up making love and then ordering breakfast.

Summer will call Wyatt Spencer (Darin Brooks) over at Spencer Publications, and she’ll ask to come by to discuss JCV business and a few other things.

Finally, at Devon Hamilton’s (Bryton James) penthouse, Amanda will show up looking upset. “I didn’t know where to go,” Amanda will wail as she runs into Devon’s arms and cries.

It certainly looks like Tuesday’s episode will be a good one! Keep tuned in to the CBS soap so you don’t miss a beat. We’ll keep you informed on all the Young and the Restless spoilers and news. Here at CDL, we’ve got you covered!