The Young and the Restless Spoilers: Sally Plots A Pregnancy – Wants Baby With Jack To Secure Future? 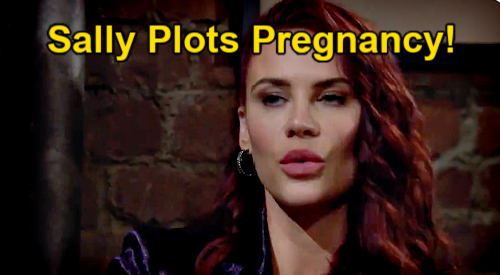 The Young and the Restless spoilers tease that Sally Spectra (Courtney Hope) is a woman on a mission. Ever since Sally arrived in Genoa City, she’s been clear that she intends to succeed one way or another.

Sally came to town to start over after a disastrous run in Los Angeles, and she’s determined to climb the ladder and make something of herself.

Well, now that Sally has ditched the executive assistant job and landed a junior executive position at Fenmore’s, she’s begun her ascent to bigger and better things.

Now, whether Sally’s plan for success included a budding romance with Jack Abbott (Peter Bergman) or not is an open question, but that’s definitely the direction in which things are going.

As Y&R viewers know, Sally and Jack have been on one date together, and it certainly looks like there will be more dates going forward. Jack seems totally enchanted with Sally, and Sally seems equally charmed by Jack.

We should look for these two to spend more time together in the weeks ahead, while some Genoa City residents worry themselves sick over it.

Summer and Phyllis don’t trust Sally at all, and during the week of March 1-5, Phyllis will actually do some snooping on Sally’s computer and discover that she’s been doing internet research on the Abbott clan.

Of course, it would make sense for Sally to do some research on the man she’s dating – a lot of people do that, so it doesn’t necessarily mean that Sally’s up to no good.

But could Sally be specifically targeting Jack and wanting to score a relationship with him? Maybe Phyllis is right and Sally is setting her sights on Jack so that she can eventually become a powerful Abbott herself.

Might Sally be hoping to eventually marry Jack? Or even to hook him forever by getting pregnant with his baby?

It would be quite an accomplishment if Sally were to wind up pregnant with Jack’s baby – and she might think that it would solidify her status in Genoa City and ensure that she’s a permanent part of the family as an Abbott mom.

If that’s the case, then we might just see Sally push for intimacy with Jack before Jack does. Assuming that this is the direction in which Sally is going to go, she’ll probably get some serious pushback from Summer and especially Phyllis as she tries to get closer to Jack.

We wouldn’t be surprised if Phyllis tries to thwart Sally’s relationship with Jack even more going forward.

But of course, this is Sally that we’re talking about, and when she really wants something, she totally goes for it. Something tells us that if Sally wants a baby with Jack, and/or a marriage to him, she might just get her way!

Do you think that Sally has a plan to have Jack’s baby? Stay tuned to the CBS soap and don’t forget to check CDL as often as you can for the latest Young and the Restless spoilers, updates, and news. We’ve got you covered!