The Young and the Restless Spoilers: Stitch Kidnaps Tessa Next – Search for Mariah Ends in Disaster? 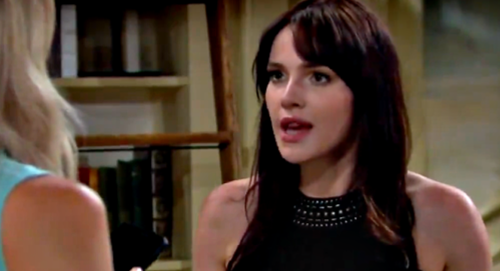 The Young and the Restless (Y&R) spoilers tease that Ben “Stitch” Rayburn (Sean Carrigan) may kidnap Tessa Porter (Cait Fairbanks) next and cause her search for Mariah Copeland (Camryn Grimes) to end in disaster. Double trouble could be brewing for this secret captor, so Stitch may feel like his scheme is spiraling out of control.

Of course, there’s no confirmation just yet on Stitch being the person responsible for Mariah’s snatching, but he’s certainly been acting shady.

Stitch’s stalkerish behavior outside the Chancellor mansion was bad enough, but now he’s telling people he scored a job that Nate Hastings (Sean Dominic) actually got.

The chief of surgery position is being filled by Nate instead of Stitch, so it’s strange that Abby Newman-Abbott-Chancellor’s (Melissa Ordway) ex is spreading a lie that could be so easily disproved.

Is Stitch really just that out of touch with reality? The doc could be even more delusional than he seems!

Whatever the case, Tessa will grow even more concerned about Mariah during the week of August 2-6.

Previous texts claimed Mariah would be back in time for her upcoming doctor’s appointment, but she’ll miss that appointment and seemingly insist she won’t return home anytime soon.

However, Tessa just won’t think this feels like something Mariah would do. She’ll also pick up on some weird wording in the texts and strongly suspect Mariah didn’t send them at all.

Y&R spoilers say Tessa will refuse to wait around any longer, so she’ll kick off a search for Mariah and hope she can track her missing love down.

This obviously seems like a job that’d be better left to the police.

Mariah’s mom is married to a detective, so it’d be simple to get Sharon Rosales (Sharon Case) to bring Rey Rosales (Jordi Vilasuso) in on this.

Nevertheless, Tessa may somehow uncover a clue about Mariah’s location and think she has to handle it on her own.

No matter how things play out, Tessa’s bound to land in a risky situation. This dangerous search could leave Tessa in just as much of a predicament as Mariah!

The Young and the Restless spoilers say Stitch could abduct Tessa next if he’s responsible for this whole plot as expected.

CDL will have tons of other exciting Young and the Restless spoilers, news and updates, so visit us regularly.