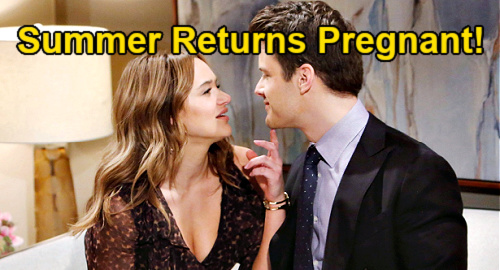 The Young and the Restless (Y&R) spoilers tease that Summer Newman (Hunter King) could come home pregnant with Kyle Abbott (Michael Mealor) by her side to help share the baby news. Will Kyle and Summer’s return bring a big announcement?

We know Summer and Kyle are indeed coming back to reunite with their loved ones this October, 2021.

Since Y&R’s going to the trouble of arranging a “Skyle” return so soon, perhaps there’ll be some exciting family updates. It makes sense to make this visit a memorable one or else why bother?

In one of Jack Abbott’s (Peter Bergman) recent pep talks, he hinted to Phyllis Summers (Michelle Stafford) that raising Harrison Locke (Kellen Enriquez) might convince Kyle and Summer to have a baby.

Jack adores being a grandpa and would certainly love to learn another bundle of joy is on the way.

Of course, almost every time Summer has told her parents anything of importance in the past, they’ve jumped to the same wrong conclusion.

Phyllis and Nick Newman (Joshua Morrow) have practically had panic attacks blurting out, “Are you pregnant?!” They’re always relieved when that’s not it, so it’s become sort of a running gag.

Imagine Nick and Phyllis’ surprise if Summer actually IS pregnant this time around!

It makes sense that Summer and Kyle would want to deliver that news in person instead of over the phone or on a video call. Perhaps that could tie in as at least part of the reason for this trip home.

Since Summer and Kyle will return to their lives in Milan after this brief multi-episode arc, it’d be a smart move to put a bun in Summer’s oven while she’s over there.

That way if Kyle and Summer return again down the road – perhaps for a longer stint in Genoa City – they can ultimately have a baby in tow. Add Harrison in the mix and that makes for a nice ready-made “Skyle” family.

Naturally, this would work well with another storyline that’s going on right now. Mariah Copeland (Camryn Grimes) is distraught over giving up Dominic Newman-Abbott-Chancellor, so Summer’s baby news might hit her hard.

It might also give Mariah a nudge toward wanting her own family with Tessa Porter (Cait Fairbanks) as soon as she can get one.

Regardless, Jack is rooting for Kyle to have another child with Summer and has assured her that she’ll indeed have one someday.

Someday might come sooner than anyone expected if Summer reveals pregnancy news with Kyle alongside her.

Summer and Kyle might even squeeze in a quickie marriage to really seal the deal on their fam and give “Skyle” fans some closure for now.

The Young and the Restless spoilers say Kyle and Summer’s October visit should be exciting, so don’t miss all the action!

CDL will have lots of other fantastic Young and the Restless spoilers, news and updates to read up on, so stop by frequently.