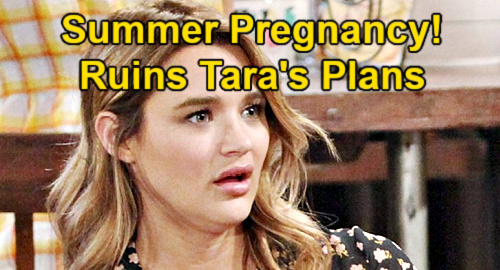 The Young and the Restless spoilers document that Summer Newman (Hunter King) is making a deep sacrifice for the man she loves. Instead of telling Kyle Abbott (Michael Mealor) about the despicable demands Tara Locke (Elizabeth Leiner) has made, Summer decided to accept Marketti’s job offer.

Summer didn’t see this twist coming, with Sally Spectra (Courtney Hope) engineering the seemingly fabulous career move, which Tara was positioned to exploit. But the soapy tables can turn in an instant if Summer learns that she’s pregnant.

The header to this section is an accurate reflection of what Tara is doing. With whatever her long-term plan was, she decided that Sally’s plot was useful and immediately employed her part of it.

Kyle has naturally fallen in love with the son he didn’t know existed until earlier this year. He’s now distracted, but Summer surely isn’t.

The plan to force Summer to leave the country, so that Kyle is vulnerable, is working. King’s character believes that she can’t risk Tara following through on her threat to take Harrison Locke (Kellen Enriquez) and deny Kyle from ever seeing his son again. So, Summer plans to relocate to Milan, Italy.

Young And The Restless Spoilers – Sally Spectra’s Schemes Are Fleeting

Sally has employed an inordinate number of schemes dating back to her days on The Bold and the Beautiful. This one is an outgrowth of the dirt Theo Vanderway (Tyler Johnson) purposely gave to her.

Theo wanted Sally to follow through on the havoc he wreaked in Kyle’s life by revealing that he was a father. Sally hasn’t disappointed, but stalled out in recent weeks.

Now, with Tara on board, it appears Skyle will be split and Sally will take Summer’s job at Fenmore’s, heading Jabot Collective (JCV). But as fans of Y&R and or B&B know, Sally’s schemes are often successful in their early stages before a crash occurs.

Young And The Restless Spoilers – Summer Newman Must Become An Abbott

Summer and Kyle’s love isn’t in question. However, she’s not an Abbott yet.

Postponing the wedding seems like a tactical mistake in retrospect. Her choice to dash the rescheduled nuptials in August will be a disaster if they also don’t happen.

So, here’s hoping that Skyle survives because Tara and Sally aren’t entitled to run Summer’s life. This could mean that Summer becomes the next mother of Kyle’s second child, as that outcome would instantly turn the tables on Y&R.