The Young and the Restless Spoilers: Team Adam or Team Rey – Which Guy Is Right For Sharon Today?

BY Sean O'Brien on May 9, 2021 | Comments: Leave Comments
Related : Soap Opera, Spoiler, Television, The Young and the Restless 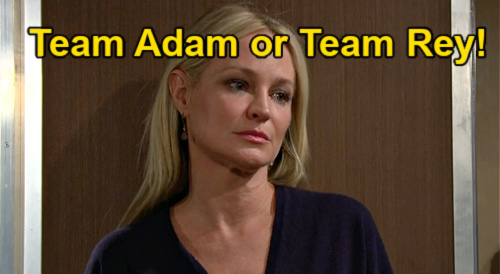 It just so happens that the only known blood relative who is a perfect match is Adam Newman (Mark Grossman). That’s a terrific soapy premise for this evolving storyline that could include the end of Shey and the revival of the early 2010’s couple, Shadam.

It’s become fair to ask a question to fans of Case’s enduring character, with the real potential that Sharon’s marriage to Rey could end and a rebound with Adam could happen. Team Adam or Team Rey?

If Adam is truly being written into redemption territory, then the basis for Shadam 2.0 can also be established. Sharon wouldn’t pair with the dysfunctional Adam. No, she would be part of his rebirth in Genoa City, Wisconsin.

Two Faith saves in a matter of weeks, with the first being Adam reporting her truck accident, certainly vindicates Sharon’s belief in his inner goodness.

There’s also no doubt that she, more than any other romantic interest, including Chelsea Lawson (Melissa Claire Egan), has a calming effect on the character Grossman brilliantly plays.

On the upside, Rey was a total stalwart during Sharon’s cancer battle. He was the rock she leaned on.

Vilasuso’s character bonded with Sharon’s children, which isn’t easy considering that two of her offspring, Faith and Noah Newman (Robert Adamson), are Victor Newman’s (Eric Braeden) grandchildren. This is a major plus for Rey, along with his lawman status. He protects and serves, which all rational minds in GC appreciate.

It’s been unusual referring to Sharon by also using the last name Rosales. She’s been a Newman for so many years on Y&R.

Splitting from Rey isn’t something Sharon is hoping for. But it might be inevitable if he decides that the connection between her and Adam remains invasive.

Sharon might not have a choice to continue Shey, but she will have a decisive say in whether Shadam reforms. This pairing’s revival has been teased for more than a year. Viewers know it’s plausible that it might be green-lighted, with Adam’s adjustment proving to be the impetus that generates fresh drama.