The Young and the Restless Spoilers: Will Noah Newman Return – Love Interest for Sally, Business Rival for Kyle?

BY Heather Hughes on May 25, 2021 | Comments: Leave Comments
Related : Soap Opera, Spoiler, Television, The Young and the Restless 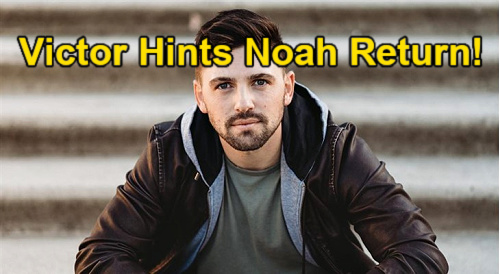 Y&R fans know Noah has built a new life for himself in London, but how long will it be until his old life in GC calls him back home?

Noah can certainly still focus on his work as a visual artist and continue to take photos, design exhibits and so much more. He can do that from anywhere, including Genoa City!

On the Tuesday, May 25 episode, Victor pitches the idea of hiring Noah for Newman Media during a conversation with Adam Newman (Mark Grossman). Victor wants Noah to put his skills to good use by helping to rebrand the website and changing their logo.

Of course, Adam isn’t so sure Noah will be interested due to Adam’s involvement in the company, but Victor feels like he can talk Noah into it – especially since Nick Newman (Joshua Morrow) is more willing to give Adam another chance at this point.

It’d be easy for Noah to change all the necessary materials and send them over from London, but Victor would surely like to have his grandson back home if possible.

If Victor hires Noah and this job goes well, there could be more work where that came from. Victor might use this as an opportunity to suck Noah back in and convince him to truly return to the Newman fold.

After all, Victor could’ve just said we need to hire a visual artist and left it at that. Why is the show bringing up Noah’s name?

That’s sometimes a hint about a character’s comeback, so we should at least consider the possibility that Noah will return at some point – whether that be in the form of Robert Adamson or a recast.

Regardless, Noah might be an interesting match for Sally down the road. Once Sally has thoroughly alienated the Abbott men, she might move on and try her luck with a Newman!

Noah tends to be a sweet guy, so he’d balance out Sally’s spicy side and might enjoy having some new fire in his love life.

Like Nick Newman (Joshua Morrow), Noah likes to rescue damsels in distress – and we know Sally is great at portraying herself as a victim. It’d also be fun to see Noah possibly take on a bigger role at Newman Media or even Newman Enterprises.

Victor might even groom Noah to be Newman’s new CEO and set the stage for a business rivalry between Noah and Kyle.

There’d be a ton of dramatic potential if Noah made a comeback – and Victor’s clue about hiring Noah might be a good sign. Would you like to see Noah Newman return?

Would you only want Robert Adamson or would you be open to a recast? We’ll provide updates as other Y&R news emerges.