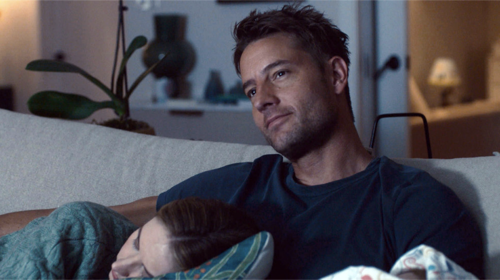 Tonight on NBC their honest & provocative dramedy series This Is Us with an all-new Tuesday, May 11, 2021, episode and we have you This Is Us recap below.  On tonight’s This Is Us season 5 episode 14 called, “The Music and the Mirror,” as per the NBC synopsis, “ Beth navigates her career path; Kate and Toby face unexpected issues; a run-in with someone from his past gives Kevin pause.”

In tonight’s episode of This is Us, the episode begins with Beth, she is looking at a space to rent at Clarke Studio to open her own dance studio. The owner tells Beth that she was skeptical when she heard that a councilman’s wife from New Jersey wanted to rent her space to open a dance studio. Beth says she wants to open next week, then the pandemic hit.

Randall is getting ready for his day, he asks Beth to help him with his cufflinks. She asks her if she is ready to go back to the corporate world, it is only a week since she closed the dance studio. She reassures him that she is ok, a lot of businesses closed because of the pandemic, she is just one of them.

Kevin and Madison are having breakfast, she says she is nervous to see Rebecca this afternoon. Kevin tells her that she will be fine. Madison gets a message from her dad, she says she hasn’t heard from him in a year and a half but now that he saw in a magazine that she is getting ready, he messages her. Just then, Uncle Nicky emerges from his room.

Kate reminds Toby about the leak in the ceiling, he says he is going to take care of it, they don’t have to call a plumber. He reassures her that he can take care of it. Kate tells him that she is going dress shopping with Madison and her mom, and she is teaching choir later.

We see a younger Rebecca, she walks in to see a teenage Kate all dressed up for a job interview, she tells her that it is a step forward. She tells her to break a leg.

On to dress shopping, Madison is trying on dresses, Rebecca says the place is so cute. Rebecca asks Kate how work is, she says it is so rewarding. She says with Toby being out of work it is hard for her to get excited about her job.

Toby is trying to fix the pipe, and it’s not going well. He could call Miguel to help him, but he says that will send out the Pearson bat signal, and he is not in the mood for that. Toby calls his father, tells him he has a plumbing issue. His father asks if he called a plumber, he says know, he doesn’t have the money because he lost his job. His father says he will be there in an hour.

Foster thanks Kevin for a performance of a lifetime, against all odds. Kevin thanks him for filling in the re-shoots around his schedule. Kevin tells him it is a work of art. Kevin calls his agent and tells him that it is horrible. Kevin is with Nicky, he tells him that he has to go save his career.

We see Beth and Randall as teenagers, he takes her to the ballet. She says no and asks to go home. Then we see present-day, Beth is getting ready for her online interview. She is told that she was double booked, they need to reschedule to another day. Beth cancels, she says no offense and thank you for your time. Beth turns off the video and laughs. She tells Deja that she dusted off her corporate attire for a meeting that she got blown off from that she didn’t want anyway.

Madison comes out in a beautiful cream lace gown and she is teary-eyed, her father texts her and he won’t be coming, after all, a work emergency. She says she doesn’t even know why she cared. Madison is crying, Rebecca tells her that she is incredibly special, kind, and beautiful. They are all crazy about her and Rebecca says her father sounds like a jackass.

Kevin is going scripts, he asks if the whole town knows that the movie sucks. He is told that his reputation took a hit, he walked off set of his last film and a Broadway play. Kevin asks what he has to do, does he have to go back to television. Kevin and Nicky are leaving the studio, he tells Nicky that he is sorry that he didn’t get to go on that studio tour, he knows he was looking forward to it. As they are leaving, Kevin sees Zoe while passing through the hall and tells Nicky to go ahead while he says hi.

Kate tells Rebecca she was a really good mom, she knows she wasn’t easy. Rebecca says she remembers taking them home, then she blinked and they were teenagers, then she blinked, and now they are here. She admits that she wasn’t an easy daughter, but she was easy to love. Kate has tears in her eyes, she tells her that there is a place she wants to take her to after this. Madison has chosen her dress, she thanks Rebecca and Kate for making her feel like a family.

Randall is home, he wants to know where Beth is, he tells Deja to tell him. She says she is at the studio cleaning up so she can turn in the keys, she doesn’t need a hero, she tells him just to be there for her, it is his best quality.

Toby’s dad arrives at his door and says he is there to help. The leak is worse than what it was.

Zoe asks Kevin if he knocked up Madison, he says yes, he did, they have twins and now they are getting married. He says she balances him out and she is a wonderful mother. She tells him that he has this positive way of seeing the world. He asks her how she is doing, she says she is seeing someone and he is great.

Teenage Beth and Randall are driving home from the ballet, she is crying. Then we see Beth cleaning out the dance studio, she finds a picture of herself as a child in ballet and her slippers.

Toby’s dad comes through, he says thank God, he needed this win. He tells his dad that he was at the company for ten years and was cut just like that. He tells Toby that he lost his job when he was eight, he spent half a year in the basement pretending he didn’t until he found a new job.

Teenage Kate arrives home, she never made it to the interview. Rebecca tells her she needs a job. Kate says she got a job at the diner. Kate tells her that every time she gets her hopes up for her, she disappoints her. Present-day, Kate brings Rebecca to her class to show her what she does. Her class sings for Rebecca. Kate tells her that she worked at that diner for nine years after dad died, and she is sorry that it took her forty years to find this job. Rebecca thanks her for sharing this with her.

Kevin is home, Madison tells him that her father is not coming after all. He tells her that he is in the worst film in history and will probably be doing infomercials for the rest of his life. All he wants to do is veg out and watch Bridgerton, he hears it is steamy. She says she was hoping he would want to watch the Great British Baking show, he tells her it sounds perfect.

Kate tells Toby the shower was great with hot water again and she should have never doubted him.

Teenage Beth tells Randall that she is sorry about the ballet, she used to love going. She tells him that there are so many mirrors in a dance room to show you your flaws. She knew hers, tried to fix them, and was told that she still wasn’t good enough.

Beth is in the studio, Randall walks in and puts music on, and asks her to dance like he dad back when she didn’t want to go to the ballet.