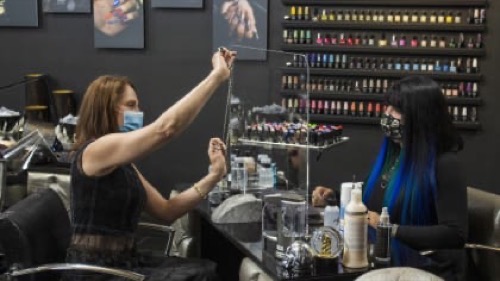 Tonight on TLC their reality show about The Martones and their glitziest family-owned and operated salon, Unpolished premieres with an all-new Tuesday, January 11, 2021 episode and we have your Unpolished recap below. On tonight’s Unpolished Season 2 premiere, “A New Beginning,” as per the TLC synopsis, “A loss hits the Martone family at its core as sisters Lexi and Bria and their mother Jennifer work together to reopen the salon after being closed due to the pandemic.”

Bria and Lexi are in the kitchen, Bria is on a cleaning frenzy. Jennifer tells them that she is going to give them a list of things that she needs for the salon, it is finally opening since the pandemic and she needs all their help. It is has been a tough year for the family, the pandemic closed Big Mike’s business down and he got really sick, and the salon closed down. Big Mike went to the heart doctor, he immediately went into the hospital, he had stage four cancer. Jennifer doesn’t think that Mike knew how sick he was.

Lexi says that unfortunately they didn’t get to see their dad that much because of the quarantine, he passed away on May 9th. Jennifer was keeping the girls away from Mike because she didn’t want them making him sick. He suffered a lot from the cancer. Jennifer is still having a hard time dealing with the loss of Mike. But she knows that it is better that he is at peace. Lexi has a hard time speaking about her dad, she can’t yet. We see some home movies with Mike and the girls, Jennifer says he was an amazing dad for the girls and he would do anything for them.

Jennifer says it is weird that they going to open the salon soon and Mike is not there. As of now, the wedding is going to happen. A year ago, Bria eloped to Las Vegas with Matt, but her dad called her and said he wanted her to get married at home. Jennifer tells Bria everything that he helped with for the wedding preparations.

Lexi has to keep her grandmother safe with the pandemic, she brings groceries to her so she doesn’t have to go out. Foxy misses her family so much, Lexi sits down with her and papa Joe. Foxy is devasted that Mike will not be there to walk Bria down the isle. Lexi tells them that she doesn’t see this wedding happening. Lexi is not a fan of Matt and hopes he and Bria don’t rush so she can find someone else.

Matt is over to help bring supplies to the salon, Lexi doesn’t like him so Jennifer is going to try to keep the two as far away as possible from each other. There are a lot of reasons why Lexi doesn’t like Matt and she says that there are too many to get past. Lexi takes Matt to the side on the back deck, she says that for Bria’s sake she is going to mildly tolerate his existence on the planet because it doesn’t look like Bria is going to get rid of him. Until he does something wrong. Lexi says she will never like Matt, but because they need him since Mike is passed, she will tolerate him for now. Jennifer says since Mike is not there, it is really important for the family to bond.

Everybody is at the salon, they are fixing everything so they follow the pandemic protocalls and are permitted to open again. The rules are you can’t have that many people in the salon, and you have to stay six feet apart. So Jennifer decides to have an opening party in the parking lot.

Jennifer is going over the finance paperwork and she is so confused. She found mortgage papers and she thought her mortgage was paid. She just doesn’t know where she is financially and she is really confused. She says that she is way over her head and she is nervous that she won’t be able to afford the thinks that Mike planned for Bria’s bridal shower and wedding.

Lexi has a client who came in, she is a magician, and she wants a set of levitating nails.

At home, Bria and Jennifer talk about the bridal shower. James, the florist drops by. He knows that their tastes are over the top, so he brings arrangements that suit their style. Bria wants a flower wall and they range anywhere from five to fifteen thousand, Jennifer is shocked.

At the salon, the magician is back, she is nervous and excited and is looking forward to implementing the nails into the show. She loves he nails, there is one where there is a levitating bunny and she is so impressed.

Jennifer got the bill for the shower, but it is a lot of money. She calls Foxy and tells her the florist wants twenty thousand dollars for the flowers alone for Bria’s bridal shower. Jennifer goes over to her parent’s house. Jennifer asks how she is going to be able to afford a hundred thousand wedding with Mike gone. Her father tells her that she is going to have to tell Bria that she has to scale it down. Her parents feel sorry for Jennifer, she has to be mom and dad at the same down. Jennifer is afraid to talk to Bria about cutting down the wedding.

Jennifer sits down with Bria and Lexi, she tells them that as a whole they have to make some financial changes in their lives. She can’t do what Mike did, he paid their cars, their medical insurance. She doesn’t want to cut back on the wedding, she knows that Mike planned a lot, but she doesn’t think she can do it. Lexi says they should just postpone the wedding. Bria says they are not changing her wedding.

Jennifer says she wants to give her the wedding of her dreams, but. Lexi says they have to focus on paying the bills for first, they can’t spend all this money on one party. Bria says she is not changing her dream because Lexi doesn’t like it. The two get in a yelling match, with poor Jennifer in between. Bria says that Mike gave Lexi everything she ever wanted and she is getting her wedding, no matter what.