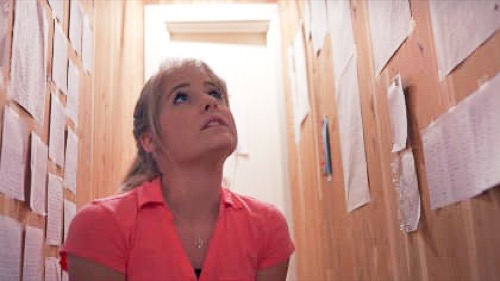 Tonight on TLC their reality show Welcome To Plathville airs with an all-new Tuesday, August 24, 2021, episode, and have your Welcome to Plathville recap below.  On tonight’s Welcome to Plathville season 3 episode 2 called “A Runaway Freight Train,” as per the TLC synopsis, “Lydia and Ethan reconnect for the first time in months.

Micah takes Helena to meet Ethan and Olivia, which raises questions if they are more than friends; Max fears Ethan and Olivia don’t approve of him; Lydia opens up about her crush to Kim.”

In tonight’s Welcome to Plathville episode, Lydia ran into Ethan. Ethan was working on his car at an auto repair shop when Lydia went to the location to apply for a job and she ran into her big brother. They hadn’t seen each other since their parents refused to let the kids say goodbye to Ethan’s wife alone. Ethan ended up cutting himself off from his family after that incident because he couldn’t handle the restrictions his parents were putting on him or how it was interfering in his marriage.

Ethan cut off his family. He decided to focus on his marriage to Olivia and unfortunately, things weren’t smooth sailing. Ethan was still dealing with his anger issues. He was angry about the way his parents tried to manipulate him and hurt his marriage and so he cut them off.

But he didn’t cut off his siblings. Ethan still wants to have a relationship with them and his siblings feel the same way. They miss him. They miss seeing him all the time. It was therefore great when Lydia ran into Ethan at the auto repair shop. Ethan was there working on his car. Lydia was there to apply for a job. The two siblings got to talking. They both missed the other and they touched base. Lydia said she wanted to get a job. Ethan got to check up on the other siblings by asking Lydia.

Lydia missed him. The others missed him as well. There was even talk that the parents felt bad about keeping the kids away from Olivia. Olivia had been welcomed into the family at first. She had a nice wedding and a new supportive family. And then everything fell apart.

Olivia’s in-laws began badmouthing her. They pushed her and her husband away. The couple moved but then the in-laws moved even closer and so the couple was forced to take alternate routes. Only that didn’t work out either. Olivia wanted to start over fresh in a new place and Ethan didn’t want to leave the small-town feel. They both wanted different things.

They felt differently about therapy and how much it helps. They were drifting apart and they both knew it. They tried stopping it. They wanted to work on their marriage and to choose each other. It’s just it’s difficult because Ethan is still so angry. He wasn’t angry with his wife. He was angry with his parents because he hated how they manipulated him and his siblings.

Ethan was so full of anger that not even therapy had helped him. He went to his first visit and he came back angrier than before because he said the therapist dint understand him. Ethan wasn’t going to feel better or heard until he confronts his parents. They were the ones he was angry with. His parents haven’t heard from him since their fight. They now only hear about it from the children lucky enough to be able to hang out with Ethan. Ethan ran into Lydia. They talked and he didn’t harp on their parents or tried to convince her to leave home. He just chatted with his sister. Lydia was glad to see him. She loves her big brother. She wishes he could return to the fold but that wasn’t going to happen.

Ethan was holding his whole life against his parents. Ethan is someone who doesn’t cope well and so he spends time looking for projects just so he wouldn’t have to deal with anything. Ethan went off to hide when Micah came over with his friend Helena. Helena was a huge fan of Olivia. She follows her on social media and she told Ethan he’s a lucky guy. Ethan accepted the compliment but he knew the truth. He knew his marriage was suffering. Both he and his wife wanted different things from life and Olivia has accepted that. She accepts the fact they’re opposites. She’s now trying to figure out how they can live and love together without those differences getting in the way or ruining their marriage.

Micah’s “friend” Helena was very pretty. She met Micah on his first photoshoot and they’ve been close ever since. Micah wasn’t sure if there could be more between him. He sorta listened in on a private conversation between Helena and Olivia and now the door is open. Helena seemed open to the idea. Micah is also open to it as well. They were also both young and single and so there shouldn’t be anything in the way of them getting together. It could probably help Micah stop feeling like a third wheel. Michael feels like that often. He’s the third wheel with his siblings and their significant others. It was even the same with Lydia now because she met someone and Lydia was already emotionally invested.

Lydia has a cell phone. She was only supposed to use it for emergencies and instead she used it to call and text the boyfriend all the time. Lydia’s mother Kim was worried for Lydia. She told Lydia not to use the cell phone to contact her boyfriend. She also told Lydia to slow her roll with this guy. Kim wanted both to finish high school first. Then the boyfriend could come over courting. And both Olivia and Ethan got to meet Max. Max was Moriah’s boyfriend and he was doing to her. it was the only thing Ethan was worried about but Max was a nice guy and that was good enough for everyone.

And the in-laws weren’t going to use Max to gain entry into Ethan and Olivia’s lives. That was one of their concerns.