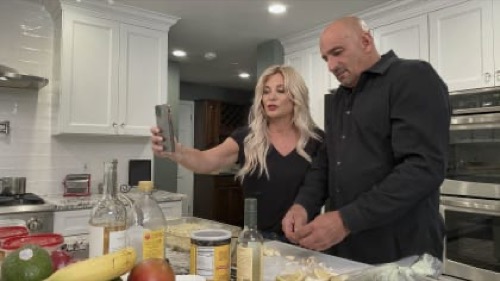 On tonight’s You, Me & My Ex season 1 episode 3 called, “Ex-Door Neighbors,”  as per the TLC synopsis, “April surprises her husband by getting a matching tattoo with her ex. Kayee’s lack of contributions around the house frustrates Jerry’s ex. Caroline is fed up when Alex’s ex crashes Friendsgiving. Lisa, Jimmy, and their spouses prepare for their RV trip.”

So make sure to come back between 10 PM – 11 PM ET for our You, Me & My Ex recap.  While you wait for our recap make sure to check out all our Reality TV spoilers, news, recaps, videos & more, right here!

Tonight’s You, Me & My Ex Recap begins now – Refresh Page often to get the most current updates!

In tonight’s You, Me & My Ex episode, the episode begins with Jerry, Jessica, and Kayee Lovey. Yesterday Kayee moved in, at first he had her in the closet, but she wouldn’t have it so he put her in the basement. Jerry understands the closet wasn’t an ideal place to sleep but he thought he could sneak in late at night.

In the basement, he can’t sneak in at night. Jessica comes in to talk about breakfast, she says she will make the kids breakfast and Kayee can make anything she wants to, she is welcome to anything in the kitchen. Kayee is OCD, she has alarms that go off throughout the day to keep on her daily schedule.

Kayee’s friend calls her and she asks what the heck did she get herself into. Meanwhile, Jessica asks Jerry if Kayee is going to be a contributing member of the house. Jessica says if Kayee thinks she is going to make breakfast for her, she is in for a rude awakening. According to Jessica, the house is really mellow and Kayee is altering it which is trying her patience. Jerry ends up making breakfast for Kayee.

April is in the car driving with Hayli and Tanner, Roy is her second husband and it is really exciting when he returns home from the service. They met when she was dating one of his friends. Roy was over the top in love with April when he met her, he popped the question before he was deployed. Ron and April got a divorce three years ago, John is her current husband. Loren is John’s ex-wife and the mother of their three boys. John says he cut April’s grass and the rest was history. Their relationship was an escape in the beginning, even though they weren’t immediately romantic.

Caroline, Alex, and Stephen who is Alex’s ex. Caroline and Alex are attending a get-together at her sister’s house. When Caroline and Alex started dating, her family gave her a hard time because Alex used to have a boyfriend. Caroline’s sister, Lydia, was skeptical about her sister’s relationship with Alex in a big sister type of way, but she now thinks they are great together. Robert is Caroline’s cousin, he finds it weird and awkward to see Alex with Caroline.

Alex’s sister Jessica arrives at the get-together. Stephen calls Alex, Jessica takes the phone, she tells him that she is getting married and she wants him to be there. Alex asks her if Caroline is going to be one of her bridesmaids. Caroline doesn’t understand Jessica’s attachment to Stephen, she just doesn’t get it.

Roy and April go see their daughter Hayli, they are getting matching tattoos. Hayli hoped for the longest time that her mom and dad would get back together. April didn’t tell John about the tattoo, she feels that sometimes it is better to ask for forgiveness than permission.

Lisa and Jack are having their friend Bryan over, Eileen is there as well and she is Lisa’ best friend. Lisa tells them that they are going on a trip to see Domenic, they are driving in an RV, and Jimmy and Wendy are going to. Eileen thinks they are nuts, a train wreck waiting to happen. Lisa says it is the way of them all getting to know each other. Lisa has never had one on one time with Wendy, she thinks the trip will bring closure.

April and Roy arrive back home, Loren and John are there. John asks where they were, Roy says they got side-tracked. April says they went on a date, Roy says no way. Roy says they got tattoos, April explains that they got the coordinates of where Tanner was born. John says he would prefer next time if she would tell him before. Roy says maybe they should all just get a drink and call it a day. John thinks Roy and April’s relationship is becoming an issue.

Alex tells Jessica that Caroline is the one and he thinking of proposing to her. Jessica is happy for him, but she thinks this is weird. Patrick is there and he thinks that Alex is never going to lose that itch and maybe Caroline is a mistake. Alex says Caroline loves him for him. Alex thinks he just needs closure with Stephen because he never broke up with him.

Jerry put a family game night together, he is hoping it is going to break the ice. Jessica refuses to go down and participate. She will go down and socialize with the kids but she refuses to participate with Jessica. In the end, Jessica goes downstairs and Kayee tries to speak to her. Jessica is confused, she doesn’t want to bond with Kayee, she is not dating her, Jerry is.