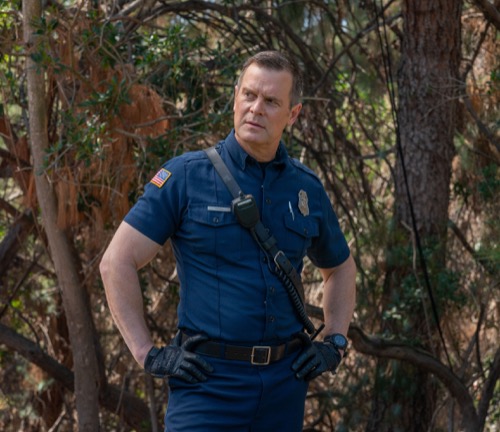 Tonight on FOX their #1 drama 9-1-1 airs with an all-new Monday, September 19, 2022, season 6 episode 1, “Let The Games Begin” and we have your 9-1-1 recap below. In tonight’s 9-1-1 season 6 episode 1 as per the FOX synopsis, “When a blimp suffers a mechanical failure and its engine catches fire, Athena and the 118 must rescue victims both inside and outside a packed sports stadium.

Bobby and Athena drop off May on her first day of college and discuss honeymoon plans, while Maddie and Chimney go to couple’s therapy.”

In tonight’s 9-1-1 episode, a blimp crashed into a stadium. The blimp had an engine fire. The fire spread throughout the blimp and the pilots were no longer in control of it. They, like everyone else, just had to watch as it crashed into the Cal-M Stadium. Once it did crash, it created pandemonium. Everyone was running away screaming. They knocked over a teenage girl. They saw wires coming from her bag and assumed it was a bomb. Assumed they were under attack. It wasn’t a bomb. It was a blimp and the girl didn’t have a device for destruction. It was a pump for her heart. It got wrecked when she fell. She was going into heart failure when Athena found her.

Athena was one of the many that got called to the scene. She was a cop. She was looking for the girl with a supposed bomb and she instead realized the girl needed medical attention. Athena called the 911 dispatch. She got Maddie. Maddie used to be a nurse and she was able to talk Athena through what she had to do to save that girl. The device the girl was wearing had been damaged in the stampede. The girl said that her mother has the other one. It was the last thing the girl said before she lost consciousness and so Athena went looking for the mother. The mother had also been injured in the stampede.

Athena grabbed the mother’s bag, called for medical help for the mother, and then she returned to the daughter’s side. She switched the old machine with the new machine with Maddie’s help. It turns out the device works as a heart transplant for the teenager. Once the switch happened, the teen woke up. She was asking for her mother and she was later reunited with her. Athena meanwhile bragged about her day to her husband. He may have said those pilots in the blimp, but she performed heart surgery. She won that round in emergency response. Athena and Bobby were going through a great phase in their relationship.

They wanted to take the honeymoon they never took. The only problem is that Bobby is having a hard time finding an interim captain for his team. He ran his firehouse with a firm loving hand. He wanted someone who would be the same. He had asked Chimney to do it last time. Chimney said he would never do it again and so Bobby asked the new girl. He asked Lucy to be in charge. She was all set to do it when she rolled her ankle during a family game of football. Her eight-year-old niece had apparently tackled her from behind. Lucy was now out of commission thanks to that niece and it was going to be six to eight weeks before she can be back on the job.

Hence, Bobby needed to find another replacement as well as someone to temp for Lucy’s job on top of it. The others had found out Lucy almost became interim captain. They mostly seemed fine with it. It was just Buck who felt a type of way. Buck felt he should have been offered the job first before Lucy. He’s been at that firehouse longer. He does the same job as Lucy currently does. He also was a great friend to Bobby. Not that Bobby took that into account when naming a temporary replacement. Buck meanwhile complained about it to Eddie and Chris. He asked them why wasn’t he chosen. Chris reminded him that he doesn’t even have a couch.

Buck moves in with girlfriends who bring their own couches. It’s been four months since he broke up with Taylor and he still hasn’t bought himself a couch. Maybe he should work on the couch thing first. Or at least that’s what Chris and Eddie thought. Buck however thought he could get the job if he just impressed Bobby enough. He was being a little brown-noser. Eddie could clearly see what he was doing and he rolled his eyes a few times while Buck was doing it. They all got called to the golf course because of an accident. Some guy was trying to get his ball out of the shredder when he accidentally turned it on while his hand was inside.

His hand was saved by his tungsten ring. The problem came because the ring shot out of the machine and punctured the stupid young man’s father. It was a freak accident. The ring basically acted like a gunshot. The father was pierced by it and he needed serious medical attention. More than what the paramedics could provide. The father was rushed to the hospital. His son went with him. Only the day wasn’t over. The firefighters got called to a second medical emergency because two people have been going without food or water in a stupid contest to win a car. It was down to two people. They both had one hand on the car in question. And they were refused medical attention because they wanted to win that badly.

The firefighters talked to the owner of the car dealership. They tried to get him to suspend the competition while the people get medical treatment and he refused to do it. He thought his competition was that important. It didn’t matter if someone died. Or at least it didn’t until the tv cameras showed up and the firefighters threatened to make him look bad. The guy ended up giving the final two both a car. He also played it up in the media as him being a good guy. Anyways, the guy was ultimately forced to do the right thing. The firefighters counted it as a win because people still got the necessary medical attention and they went home for the day.

Chimney’s place was a little crowded. Maddie had to come over with their daughter because her apartment got flooded and she needed a place to crash. What neither she nor Chimney thought would happen – did end up happening. They slept together. Chimney then snuck out the next morning without talking to Maddie and so that made Maddie feel sad. It also made her realize how Chimney must have felt when she left for six months. So, she did what she should have done months ago. She talked to Chimney. She told him how much she wants to be a family with him and she also swore that she wouldn’t run off again. She was staying this time.

Chimney wanted to be a family as well. It was just his fear of her leaving again that was holding him back and so he was ready to be with her after she made her promise.

As for Buck, Hen grew so fed up with his brown-nosing that she went to Bobby about it. She asked Bobby to finally name his new interim captain. He did. He named Hen as his replacement while he was going on vacation. And he talked to Buck as well. He said Buck wasn’t at ease with himself and he needed to work on that before he could be chosen for a leadership position. So, Buck finally bought himself a couch.

Bobby and Athena were all set to leave on vacation when they were forced to cancel it at the last minute because Athena’s father drove his car through his house.