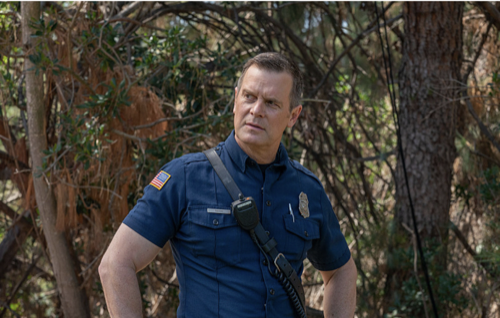 Hen asks for a second chance with her medical school professor; Maddie and Chimney regret hiring a nanny for Jee-Yun after the woman completely takes over their apartment.”

In tonight’s 9-1-1 episode, a woman woke up to the sounds of someone breaking into her house. The woman named Sharlo immediately called 911 and then she refused to listen to Josh when she got him. Josh tried to tell her to stay put. He told her to not go wandering around the house. He even told her that help was on the way. She ignored all of that to do whatever she wanted to do and what she wanted was to escape the house. She went downstairs. She made it to the front door when she remembered she didn’t have the clicker to open the front gate. She then went into the garage by means of the kitchen and she ran into a “monster”. She ran away in fright. She injured herself. And was found unconscious.

Athena checked the perimeter. She didn’t find any signs of someone breaking in. She also had to call the EMTs for the homeowner and so Buck and Eddie responded. Buck heard the woman say she saw a monster. He went looking for one and he found it. He found a raccoon in the kitchen. He called animal control. The monster was taken away and everyone thought that was it. But a few hours later, 911 got another call from the house. That time from the husband, Samir. He came back from his trip early once he heard that his wife was in the hospital and he stopped by the house to pick up a few things when he heard two men talking in his home.

He tried to stay put. He was found and he was shot. This all happened while he was on the phone with Maddie and so she sent him all the help he would need. Samir was rushed to the hospital. Maddie later heard that he survived the shooting. Which was a great relief for her. She thought he lost him when she heard the gunshots. But Samir surviving an attempt on his life, was just a happy note to an otherwise ugly story. The police were also brought in to investigate by that point. They all thought it was just the raccoon when the wife got injured. Now, that the husband was actually shot, people began taking the wife’s call a little more seriously. They investigate whether or not someone did try to break in and that they got scared off when the wife found the raccoon.

She did scream pretty loud at the time. The police initially thought that scared off the intruders. They left. But they were watching the house. They returned once they saw the fire and police departments left. They tried to get whatever it was they were after and that time they ran into the husband. The husband who saw them. They couldn’t leave him alive and that’s why they tried to kill him. With both Samir and Sharlo in the hospital, the police tried to take it all seriously. They brought in Athena. She was the one that responded to Sharlo’s incident. She checked the house and she knows that no one else was there.

It really just was a raccoon. The police still thought that was weird and so they looked into the other houses that were robbed. Samir and Sharlo’s home wasn’t the first. It wasn’t even the third. It was about the seventh. There was also a pattern to all the robberies. Athena noticed it. She realized that the robberies happened right after the homeowners called 911. Athena and the detective on the case then went to the call center. They spoke with Maddie. They asked her to check who responded to all the 911 calls and it was a bunch of different people, but Maddie also checked who accessed the file and she found her very own access code had been used in part of the robbery ring.

Maddie knew she never opened those files. Someone must have stolen her code. It took her a minute but she eventually realized the new kid saw her use her code. She was teaching him how to log in and she used herself as an example. She used her code. He saw. He then used it whenever he was illegally accessing files to see who was home and who wasn’t. Maddie agreed to wear a wire. She got the new guy on tape admitting he played in a part in the robberies. It seems his stepdad had gambled himself into debt. He borrowed from the wrong people and those people knew the kid had access to who would be home.

No one was supposed to get hurt. The kid admitted to that on tape and he also told Athena when she arrested him that she could find her shooters by going to another house. He gave them another house. Even after they shot someone. He could have come clean then and yet he didn’t. He was now going to jail for the part he played and the call center was no longer a happy place. Someone violated their sacred oaths to settle a debt with loan sharks. It was going to be a while before they replace him with someone else. Maddie also has a personal life problem. She hired a nanny/housekeeper to help in the apartment. And the woman was a clean freak.

She cleaned everything once a day. She also refused to let Chimney come inside the apartment with his shoes on. then there was never-ending germ facts. The nanny knew so many of them that she refused to even let a dog come inside. It turns out Bobby couldn’t keep little Hoover. Athena was allergic. He tried to give the dog to Mae only she was also allergic. He gave the dog to Hen. She had it for a day before it chewed up the baseboards and ripped up all the pillows. She then gave him to Eddie. He made such a mess at Eddie’s that he tried to bring the dog to Chimney and never made it past the front door. And so then he went to Buck.

But the dog barks too much and Buck was reminded by his landlord that building has a no pets policy. The dog then had to go to someone else. Buck and Eddie also later helped a woman whose house they destroyed by rescuing her brother. The brother injured himself in a DIY project and so the house needed as much help as it could get.

As for Hen, she made a great impression on her professor. Which allowed her to pass her exam. Hen was now officially a doctor, but her wife had an accident at work and so there might be some bad news coming in.