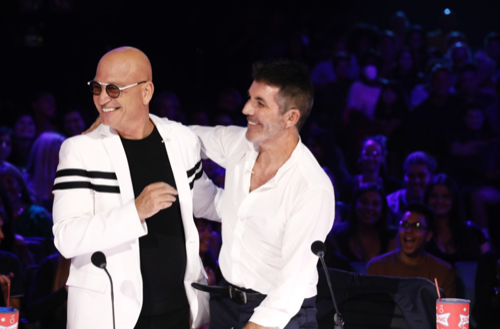 Tonight on NBC America’s Got Talent begins with an all-new Tuesday, August 23, 2022, episode and we have your America’s Got Talent recap below! On tonight’s AGT season 17 episode 15 “Qualifiers 3″, as per the NBC synopsis, “Eleven performers take the stage live from the Pasadena Civic Auditorium as judging is turned over to the viewing audience to vote their favorite performers into the final round. Viewers can vote by using the “AGT” Official App or going to NBC.com.”

Tonight’s America’s Got Talent episode begins with Qualifiers 3 group which includes Simon Cowell’s Golden Buzzer, and singer Sara James who is 14 years old. Tonight, eleven more acts will be walking onto the stage, tomorrow only two will be moving forward to the season finals. Tonight’ is trough competition and they have to impress America.

The first act tonight from Japan is MPLUSPLUS, a Funkanometry and LED dance group.

Judges Comments: Howie: “I am going to be totally honest with you, this did not blow me away. It is just programmed LED lights. You can buy these in Santa Monica, I don’t understand what the twelve years of work were that you say took to create this.” Simon: “I completely disagree with the other judges, isn’t this a Vegas act.” Sophia: “I like this more than the audition, it was more like a Vegas show.”Heidi: “I do agree with Howie. I like the idea of it, is it spectacular enough? It wasn’t.”

Up next is an uncle and niece, and they sing, Simon said their auditions this year. Jojo and Bri are up.

Judges Comments: Howie: “I like you two, the gimmick of the two you, I have been following you both on YouTube, but Bri is the star and she would do better alone.” Simon: “I meant it when I said you were one of my favorite auditions of the year. I do think the end part of the performance was better than the first part and I really like you two.” Sophia: “I think your performance is more than your great voices, it is about your chemistry.” Heidi: “I love you two so much I want to bottle up this vibe and this beautiful feeling. You are so cute and talented.”

These twins blew AGT apart, from Canada are the Cline Twins up next.

Judges Comments: Howie: “Simon is a liar, if you were on Canada’s Got Talent, you would have won. You guys are so pucking good.” Simon: “Howie didn’t want you to go through to the final, and I don’t care what he says, you are going through. What you do is difficult, the best act of the night and only two are going through.” Sophia: “I Love you guys, this is something new that we have never had on AGT, it is amazing. You guys are so good at it and you bring joy to the stage.” Heidi: “I need this in my life, you guys are awesome, this is incredible to watch.”

This girl always told herself she couldn’t do something like this and here she is, Amanda Mammana. She has a stutter and they haven’t found a reason why, and she doesn’t stutter when she sings. She will be singing an original song.

Judges Comments: Howie: “My son stuttered as a kid, so to hear your story I can relate to it. Your purity is heroic.” Simon: “What a difference from the shy person we first met. Did see your confidence, to sing your own song, this is going to make a difference and I am happy you are in the finals, you deserve it.” Sophia: “I am so happy you are here, congratulations, you have accomplished so much.” Heidi: “I can only echo what everyone says, your voice is like velvet, it was beautiful.”

When one of America’s most famous pop star calls and want her to be a part of her new girl group, you say yes. That is what XOMG POP did. They will be singing their second original.

Judges Comments: Howie: “It hurt, the tone hurts for me, it’s not for me. My granddaughter says this is the best act of the season, not for me.” Simon: “You know who your audience is and that is super important. In terms of preparation and energy, amazing. I didn’t personally like the song. Connect you to the right song and I think you are unstoppable.” Sophia: “I love them, this time you were more prepared and more in synch.” Heidi: “It is like a pinata exploded and seven little spice girls fell out. I have to commend you for singing and dancing live, that is hard to do, it was fun.”

Simon and Howie said they saw anything like this magic act, from Paris, France, Nicolas RIBS.

Judges Comments: Howie: “The bar this year for magic has risen, and I predict you have a good chance at winning this whole thing.” Simon: “We had so many amazing acts, I forgot about you, however, I am an idiot. That was honestly one of the best magic shows we have seen live.” Sophia: “You have brought a new style of magic to AGT. You are one of my favorite acts of this season.” Heidi: “The combo of technology and reality is so mind-blowing. Your skill set is beyond words, I would like to hear a little more of you speaking French because it is beautiful. You are charming and I think your daughter might be right, you may be the best magician in the world.”

Simon says the best is still yet to come, he knows who is up next, Mia Morris, a one-woman band.

Judges Comments: Howie: “You are a rockstar, an amazing performer, amazing musician but I don’t know if you are an amazing singer and songwriter. I think you made w wrong choice.” Simon: “I didn’t love the song. The vocals were out of tune. But what I did, you didn’t compromise, it was like a fantastic mess and that was good. I like you.” Sophia: “I said it at the audition, you are the coolest girl and I still think you are. I love every time I see, your energy, you are great.” Heidi: “I think you are cool and totally different energy to the stage. You are raw and unpolished and you give 200% when you are up there.”

This contestant has severe hearing loss, but she uses that to channel her comedy, Hayden Kristal is up next.

Judges Comments: Howie: “I was laughing out loud. You rose to the occasion, you are authentic and funny. You have a bright future ahead of you young lady.” Simon: “I am really curious, I loved your act. Why is winning important to you? (I think I won by just being here at all) You really popped tonight, it was so comfortable and funny and you have a star glow about you. That was a great performance.” Sophia: “I think what you do on that stage is incredible. You are funny and likable and I hope America votes for you.” Heidi: “You had me at dogs, I love dogs, I can totally relate. You are funny, the dog lovers will vote for you.”

This woman had all the judges on their feet, from Madrid, Spain, next is singing ventriloquist Celia Munoz.

Judges Comments: Howie: “We love originality and you are original. What you do is acapella, you are adorable and very good, I loved it.” Simon: “I was laughing so much, it was brilliant, unique, and different. Sophia: “You are great and the kind of action you can only see on AGT.” Heidi: “I loved the tribute to Olivia Newton-John. I love how you create the set and suck us into your world. I don’t know how you eat and do that at the same time.”

Simon had a problem with this act, he thought it wasn’t long enough, from Vancouver, Canada, Funkanometry is up next.

Judges Comments: Howie: “I felt the funk, I liked the music, it was like a viral TikTok.” Simon: “We do have a lot of technical dancers on the show who are incredibly boring you are not. I really like you two, we needed you. You are one of my favorites.” Sophia: “You are so surprising, it is amazing, you might not be at the level of other dancers on AGT but I loved it.” Heidi: “I have to be honest, I can’t say that I loved it this time. It was like a middle school talent show.”

Simon’s golden buzzer is next, she is only 14 and her name is Sara James from Poland. She sings “Rocketman” by Elton John.

Judges Comments: Howie: “That was a winning performance. Your look, your poise, and your talent are that of a superstar.” Simon: “I am actually very emotional for you right now. You are 14 years old, the pressure on you to deliver tonight and to choose that song was genius. You made the song your own. Elton John is going to re-tweet the song.” Heidi: “Simon you know how to pick the stars.”